Carry in, carry out: Fight the Catskills trash problem 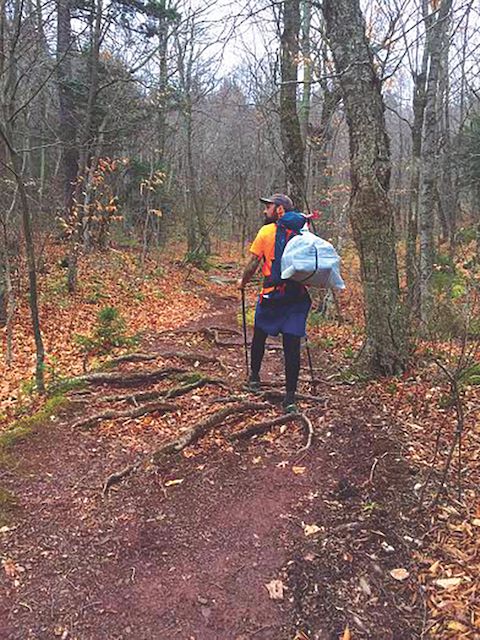 Above: The author, Jeffrey Vincent, picks up trash on a Catskills hike in December 2015.

Outdoor recreational activities are booming, and the Catskill Mountains are making a comeback in a big way. Movies like “Into the Wild,” “A Walk in the Woods” and “Wild,” starring Reese Witherspoon, which feature hiking, camping and backpacking, have helped spark new interest in the mountains.

But along with more people comes more trash in the pristine Catskills wilderness.

The 2015 summer season brought unprecedented amounts of trash to popular campgrounds, swimming holes and campsites throughout the Catskills. At Peekamoose Blue Hole in Ulster County, the trash problem became so bad that the New York State Department of Environmental Conservation brought in a dumpster to the remote backwoods location.

For me, the trash problem hit home on a lovely late morning in December 2015. I was the caretaker for the Batavia Kill shelter on Blackhead Mountain in the northern Catskills of Greene County. That day, my girlfriend and I hiked to the lean-to to check on things.

At first glance, things seemed okay. But the more I looked, the more trash I saw: empty beer bottles, tin cans, toilet paper and broken glass. Luckily, we had a trash bag with us. The more garbage we picked up, the more we started to find. It was hidden everywhere: under rocks, shoved under the floor of the lean-to, under logs in the fire pit and hanging—literally—from the rafters. After an hour, we managed to gather about 20 pounds of other people’s garbage from around the campsite.

Abandoned trash does more than just make a mess of nature—it has a direct effect on the wildlife and other humans. Food scraps and wrappers attract animals from mice to bears to camping areas, making them a nuisance and sometimes a danger to humans. Some trash, like plastic bags, cannot be digested by animals and can get lodged in their gut, causing a long and painful death. Even biodegradable food scraps like banana peels should be packed out of the woods. And if the animals don’t get it first, other humans like me will have to pick up your trash.

For newcomers to the woods, here’s a trash primer: “If you carry it in, carry it out.” This means anything you take with you on your trip should be taken home with you—including your garbage.

This includes human waste. Many lean-tos and designated campsites are equipped with an outhouse. To avoid creating minefields of human waste, use these composting toilets when provided. If you absolutely must poop in the woods, the Leave-No-Trace Center for Outdoor Ethics recommends burying your waste in a “cathole.” This hole should be six to eight inches deep and at least 200 feet away from any source of water to avoid contamination. To dig it, bring a small plastic trowel. Carry out used toilet paper in a plastic bag brought for that purpose.

And remember: “Take only pictures, leave only footprints.”

Jeffrey Vincent is a licensed New York State trail guide and the owner of Catskill Mountain Wild, a Catskills guide service. catskillmountainwild.com. This story was originally published the 2016 Catskills Outdoor Guide, which hits the streets this weekend.