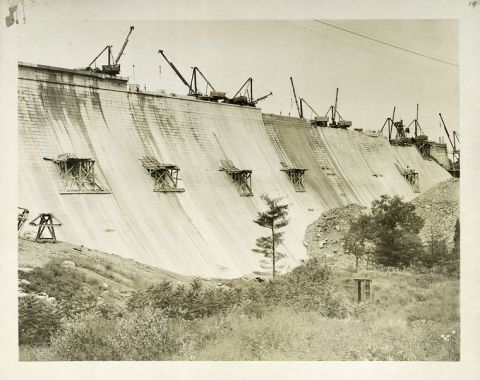 Above: A view of the downstream face of the Olivebridge dam in 1911 as it was under construction as part of the soon-to-be-flooded Ashokan Reservoir. Image via the Ashokan Watershed Stream Management Program. Used with permission.

One hundred years ago, on the evening of December 27, 1915, clean drinking water from the Ashokan Reservoir, located in the Catskill Mountains near the Ulster County town of Woodstock, arrived in New York City taps for the first time.

It was a quiet milestone, according to an article published by the New York City Department of Environmental Protection on Tumblr.

The Ashokan Reservoir had begun filling its 128-billion-gallon basin two years before, in 1913. In November 1915, water from the Ashokan began flowing through miles of tunnels towards New York City, 100 miles south. In December, it reached its first customers in the Bronx:

The arrival of water from the mountains on December 27, 1915, was humbly marked in an annual report the following year, which noted that city engineers began to draw 7 million gallons a day from the new system to serve portions of the Bronx.

The Ashokan was the answer to the perennial fear of a “water famine” in New York City, and its construction allowed the metropolis to grow at a breakneck pace throughout the 20th century.

Above: Clouds on the Ashokan by Victor Troiano.

An impressive 12 miles long, 177 feet at its deepest point and able to hold 128 billion gallons of water, the Ashokan Reservoir was hand dug by tens of thousands of laborers over a period of eight years, from 1907 to 1914.

The Ashokan Reservoir's construction was a wonder of the world rivaling the building of the Panama Canal. But it came with a cost.

Above: Ashokan walkway by Michael Kreho.

Numerous hamlets in Ulster County were flooded in order to create the reservoir. Thousands of people were displaced and relocated, and so were their homes, churches and shops. Even their cemeteries were moved; between 1909 and 1911, thousands of bodies buried in cemeteries in the future flood zone were disinterred and moved, according to “The Last of the Handmade Dams,” a history of the reservoir's construction by Bob Steuding.

"Deep Water: Building the Catskill Water System," a film available on Vimeo and YouTube, is full of archival footage of the decade-long project and celebrates the engineering of such a monumental task.

Gina C. Gould, Ph.D is the Executive Director of The Ashokan Center, where nature inspires.