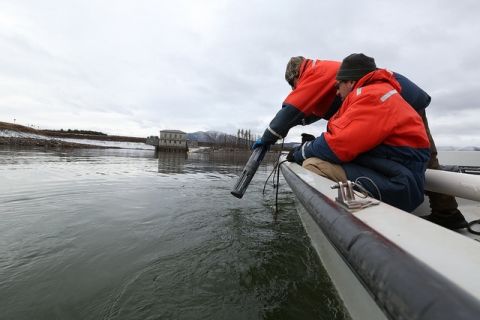 Before this year, scientists at the New York City Department of Environmental Protection had to spend the winter taking an airboat into the icy waters of the Ashokan Reservoir to sample the quality of the water destined for the city's taps by hand.

Now a robotic sensor designed to spend the winter under the ice will take over the job.

Robots mounted on large rafts already sample the water on the city's Catskills reservoirs in warmer months, but they are too large and fragile to handle ice and snow. Every winter, they are hauled out.

Above: A large robotic monitoring buoy, which monitors the Ashokan's water quality in the warmer months, being removed from the reservoir. Photo via the NYC DEP's Flickr page.

A new under-ice buoy was installed in the Ashokan last week; a second will be installed in another spot on the reservoir soon, DEP staff said in a press relaese. The new buoy is much sturdier and slimmer than its raft-borne counterpart:

[It] is 6 feet tall and slender, allowing it to move under the ice and pop back up as wind moves large chunks of ice in the spring. The buoy carries a long, steel cable that is equipped with multiple sondes that measure water quality at different depths within the reservoir. Because water quality can vary at different depths within reservoirs, DEP will use the additional information gathered by the buoy and sondes to select the best water from Ashokan Reservoir to be conveyed by the Catskill Aqueduct to New York City. The buoy also carries inside a watertight container, a battery, cellular modem, and a data logger. An antenna transmits data back to DEP scientists. The under-ice buoy will monitor several parameters that are important to selecting the best drinking water at different depths within the reservoir, including temperature, turbidity and specific conductivity. In total, the equipment weighs 30 pounds and is held in place by a 70-pound anchor at the bottom of the reservoir.

Because the new sensors will be taking measurements all winter long, the DEP is expecting more detailed data on the city's water supply in the crucial winter and early spring:

The buoy will provide DEP with water quality data collected below the ice at frequent intervals allowing scientists to see the effects of storms, snowmelt and other events that produce runoff from the surrounding watershed earlier than before. Previously, these data could only be retrieved periodically in the winter by water-quality scientists who collected water samples by hand from an airboat.