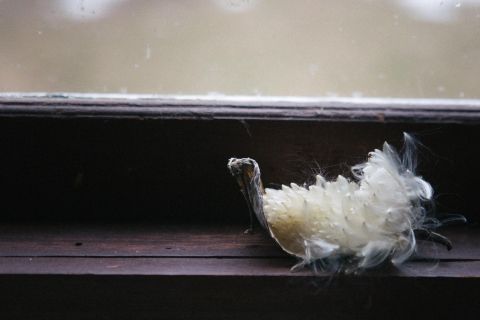 Along with maple syrup and the first red blush of buds on the mountainsides, spring is bringing a bloom of new publications devoted to covering the culture, arts and lifestyle of the Catskills — through the eyes of flatlanders.

These days, urbanites are fleeing to the Catskills from New York City in droves. If you ask them why, they say that they're searching for something -- a kind of authenticity absent from more citifed environs.

“We yearned for a place with a slower pace of life, fewer pretensions, friendlier people, and more authenticity — something we had always experienced on our trips here," said Alecia Eberhardt, a new arrival to the Catskills who is the editor of Catskill Made, a new digital quarterly journal that launched on March 21. "So in the summer of 2013 we made the leap, and almost two years later, here we are.”

Catskill Made is designed to showcase Eberhardt's experience of the authentic Catskills. (Learn more about the journal in a Q&A with Eberhardt by Watershed Post correspondent Anne Pyburn Craig.)

It's suddenly a very popular topic: Five other new publications are doing something similar, all with a downstate or recently-transplated audience in mind.

Upstate Diary, founded in November 2014 in the Ulster County town of Highland by new upstate resident Kate Orne, is a website and newsletter that features interviews and photos with artists and other “creatives” living and working in the Catskills.

Orne has worked as an editor at Interview Magazine, and she brings the interview format to the topic of “how the natural beauty and challenges of rural life informs and influences the creative process.” So far, she's covered a variety of Catskills artists doing interesting things, including Roger Ross Williams, the first black person to win an Oscar for directing and producing a film, and Nicholas Weist, the founder of an artist's residency called The Shandaken Project.

Nhi Mundy, a Sullivan County transplant who launched a Vietnamese restaurant called Bà & Me in in Callicoon in May 2014 and has expanded it to a second location across the river Honesdale this year, is behind the soon-to-be-launched Delaware Vally 8 Magazine, which will cover eight towns spanning both sides of the Delaware River this spring.

Like its Sullivan County-based predecessor, Green Door Magazine, which ceased publishing last year, DV8 will be a quarterly magazine that will cover lifestyle and arts in equal measure. Mundy is partnering with editor Laura Silverman to write about “the upstate scene, bringing the best in food, culture and shopping to a curious and discerning audience.”

And North, “a curated guide to upstate New York for creative individuals,” is a website and lively Instagram feed that launched in May 2014. While the site covers all of upstate New York, founder and creative director Emma Tuccillo has a special love for the Catskills, where the publication hosted an end-of-summer party at the Sprucetown Inn last year and a catered dinner in a wood-heated Bovina greenhouse in the dead of winter.

Edited by J.N. Urbanski out of an unidentified town in the central Catskills, Upstate Dispatch is a website news magazine that launched in September 2014. It’s “devoted to the city folk who are making the country their home.” Photography and a “daily Catskills” post accompany interviews with Catskills transplants and businesses.

The veteran Hudson Valley publisher of Chronogram is joining the boom of new Catskills publications, but in reverse: It’s launching a New York City print publication this summer that will cover the Catskills housing scene. Luminary Publishing, which publishes Chronogram, purchased Upstater, a real estate blog, a few years ago, and is now launching a print version of the site that will be distributed exclusively in New York City, according to press release issued by the company on Thursday, March 26.

Finally, there is Catskill Made, a “quarterly digital journal” built on a web and mobile app platform that aims to showcase the work of “artists and makers in the Catskills.” The first issue, appropriately called “Equinox,” launched on the first day of spring, Saturday, March 21.

Writer and editor Alecia Lynn Eberhardt and photographer, designer and web developer Tom Smith, both based in Saugerties, are the team behind the publication, which is built on a web application platform and can be accessed from a smartphone or a computer. (Disclosure: Eberhardt is a correspondent for the Watershed Post.)

“The easiest way to explain it is a ‘digital journal,’ Eberhardt said. “People here are very hands-on, very creative. We wanted to explore what it is about this environment that fosters or allows that lifestyle.”

With Catskill Made, Eberhart and Smith are hoping to resist commodifying the Catskills. They are less inspired by Vogue or Brownstoner than by Esopus, a resolutely anti-advertiser print art journal based in Brooklyn that seeks to bring “unmediated” art to its readers.

“Since the Catskills have been having their ‘resurgence’ as of late, we'd been seeing a lot of publications and websites out of the city about the region but aimed toward New Yorkers just visiting,” Eberhart said. “These publications seemed to hit on the same places and feature the same people again and again. We're specifically trying to move away from these urban-focused publications toward something that takes into consideration the native creativity at work here.”