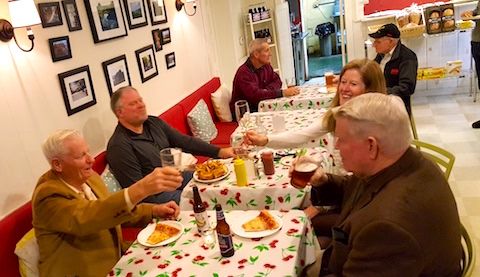 Above: Kenny Curry, left, toasts the first beer to be legally sipped in Neversink since 1935, along with Tim Dugan, Eureka Market owner Jennifer Grimes and Ed Sykes. Photo by Niva Dorell.

Eighty years after the town of Neversink in Sullivan County banned the sale and public consumption of alcohol, Kenny Curry took the first legal sip of beer at the Eureka Market and Café in Grahamsville on Thursday, Dec. 17.

Curry won the honor through a contest Grimes ran that asked, “Why you should be the first person in 80 years to legally purchase alcohol in the Town of Neversink?”

“I wrote about how my father was probably one of the last ones to buy a beer in Grahamsville before it went dry,” Curry said. “I thought maybe I could be one of the first to legally again buy a beer.”

Above: Kenny Curry takes the first legal public sip of beer since 1935. Photo by Niva Dorell.

Sitting a few tables away, his brother, Earl Curry, 87, recalled going to Neversink’s first post-Prohibition bar, owned by Frank Patruno, with their father in 1933. That was two years before Neversink passed its own post-Prohibition alcohol ban.

Earl Curry said that the town passed the ban because “they didn’t want the workers coming over from the dam.”

In the 1930s, Neversink was bracing for an influx of laborers. Construction was beginning on the Merriman Dam, which created the Rondout Reservoir, one of four reservoirs built to supply water to New York City.

Above: Earl Curry, who remembers drinking in Neversink's last legal bar in the 1930s. Photo by Niva Dorell.

When a man was killed after stumbling out of a local saloon into the street, Neversink voted to outlaw booze in 1935, making it illegal to sell or drink alcohol in a public establishment.

Since then, the citizens of Neversink have voted to uphold the ban three times, according to the Times Herald-Record.

As recently as 2012, Jennifer Grimes, the owner of the Eureka Market and Café, spearheaded a campaign to overturn the alcohol ban and lost by 101 votes.

“I was so shocked that people would really vote against it in such numbers,” Grimes said. “It was so different from my outlook on what a restaurant means to a community that I was really surprised.”

But this year, with the encouragement of Keith Zanetti, who was running for Neversink town council, Grimes tried again.

This time, on Nov. 3, Neversink voters narrowly approved a ballot proposition to legalize the selling of alcohol in restaurants and convenience stores.

The vote was a tight one—the provision to allow alcohol sales in convenience stores only passed after absentee votes were counted.

As of Thursday, the Eureka Market has a liquor license and sells local and national beer and wine. Grimes plans to eventually add spirits.

Above: Beer in the cooler at the Eureka Market. Photo by Niva Dorell.

“What I really look forward to,” Grimes said, “is waking up tomorrow and seeing that the world is still here.”

Grimes, Zanetti and others hope that turning Neversink wet will help revitalize the town.

Zanetti, who won his election for a seat on Neversink’s town council in November, had once voted to keep the booze ban himself.

He understood the mindset of many of his neighbors, including town supervisor Mark McCarthy, who wanted to keep alcohol outside town limits.

“They just do because that’s the way it was,” Zanetti said. “And I respect that, because I was there too.”

What changed Zanetti’s mind was realizing how much business was being lost.

“I was talking with a good friend of mine who is a senior citizen, and she was saying, ‘We’re sinking. We need to do something in this town. We need to go wet.’ That’s when I approached Jennifer Grimes,” Zanetti said.

The timing was right. Grimes had been considering closing the Eureka Market.

“To have an eatery without alcohol is hard,” she said. “Alcohol has a nice margin. It really helps you get through, especially through the winter.”

From under-the-table to out-in-the-open

It was fitting that Kenny Curry was the one to break Neversink's alcohol ban. He had a hand in building the Eureka Market, then a garage on one side and a restaurant called Carol’s Kitchen on the other side, in 1972.

“Back then, if people wanted to have a drink at the restaurant, they brought their own,” he said. “Nobody said anything. It was an under-the-table thing. But almost every other house had a bar in the basement. Still do.”

He laughed and looked down at his beer.