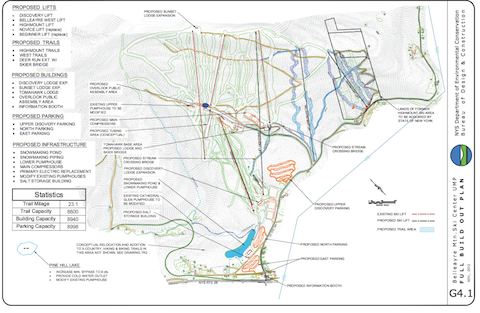 The New York State Department of Environmental Conservation wrapped up its role in the 16-year review process of the Belleayre Resort on Wednesday, Dec. 2 when it issued environmental permits for the resort and for upgrades to the state-owned Belleayre Mountain Ski Center next door.

The documents constitute the state’s sign-off for the two interlocking projects: a private developer will build the 739-acre Belleayre Resort in the Ulster County hamlet of Highmount, while the state will give the public ski center a facelift to accomodate the expected increase in use. The Belleayre Resort project was originally proposed in 1999, and has undergone extensive review by the DEC.

The DEC issued pollution discharge permits to the resort’s developer, Crossroads Ventures LLC, and to the Olympic Regional Development Authority, which manages the state-owned ski mountain. The documents went live on the DEC’s website on Thursday, Dec. 3. Click here to see them.

The DEC also published State Environmental Quality Review Acr (SEQR) Findings Statements for both projects. In the findings statement for the Belleayre Resort, the DEC wrote that it “hereby approves the SPDES and Protection of Water permits.”

Although this is the last step required by the state to sign off on the long-awaited resort project, the DEC’s involvement is not over. Last month, the Catskill Heritage Alliance announced that it was suing the DEC over its review of the Belleayre Resort.