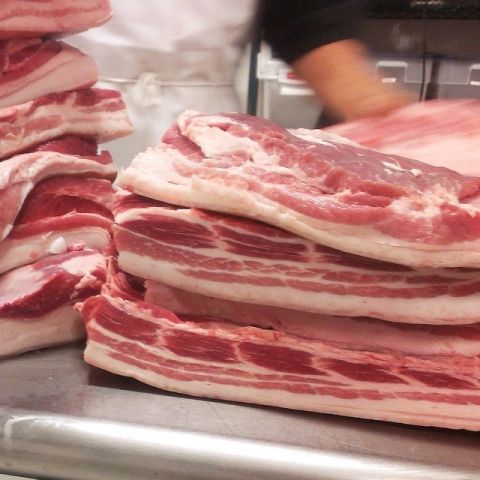 Above: Locally cured bacon from Fleisher's, the artisanal Catskills butcher shop that has outposts in Kingston and Park Slope, Brooklyn. Photo via the Fleisher's Facebook page.

Another downstate media outlet is tackling our question: Is 2015 the year of the Catskills? According to a thoughtful article in the Daily Beast today, the answer is a great big yes.

The article, "The Catskills Gets its Groove Back, with Brooklyn's Help," only discusses Sullivan County. But the idea is the same one we're hearing for the region as a whole again and again this year:

Suddenly, “the Catskills” is everywhere, branded and proud. First you notice the word on the cheese at the local greenmarket, then you try Catskills craft brew at your favorite pub, the Catskills then makes the news when its casino plans get the go-ahead, and finally you hear it when Governor Cuomo’s passes his anti-fracking legislation.This sudden omnipresence also reflects the renaissance of the Catskills area itself: around 100 miles north-northwest of New York City, famously home to hundreds of decimated hotels, the Catskills is making a comeback in its own right.

The Daily Beast interviews Randy Lewis of the Catskill Brewery and Sims Foster of the Arnold House, both located in Livingston Manor, and Roberta Lockwood, president of the Sullivan County Visitors Association. (With the emphasis on Livingston Manor, it's surprising that the Beast doesn't mention the new Brooklyn bar named after the hamlet, the ultimate sign of Catskills cache. The Times-Herald Record wrote about that this week, too.)

There's an interesting discussion of why the Catskills appeal to Brooklynites and millennials. Lewis says it's a renewed emphasis on local food, health and getting out of the city. Foster, too, invokes food:

The article quotes one of those millennials who is heading to the Catskills to live the locally cured bacon dream:

Robin Jones, 32, who currently resides in Brooklyn, is ... planning to open a bed and breakfast with her business partner and friend.

“I’m looking for a change of pace and a life with a bit more balance built in” she says. “I thought opening an inn was a novel concept in the area, and while I still think I’m ahead of the curve, I’ve seen a lot of places opening up in the last few months. I come from an economically depressed area of Missouri, and see a lot of similarities, but also a lot of opportunities in the Catskills,” she says.