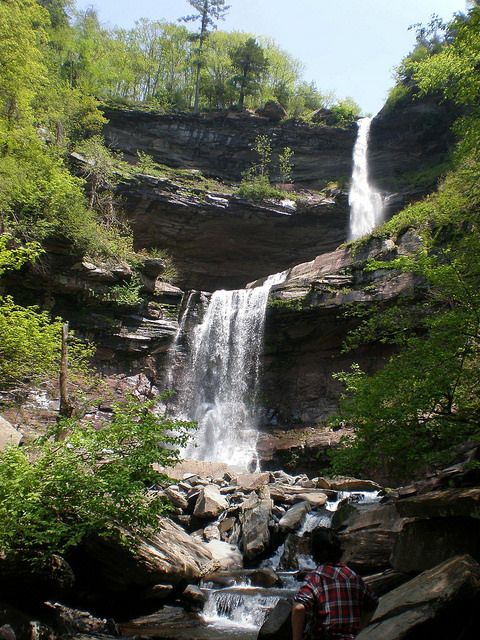 Above: Kaaterskill Falls in April 2014. Photo by Paige Patunas, shared with the Watershed Post via our Flickr pool.

A Dutchess County woman died yesterday evening after she fell from the top of Kaaterskill Falls, a popular Greene County tourist attraction that is one of the tallest waterfalls in New York State. (At 260 feet, it's much taller than Niagara's 170 feet.)

The Daily Mail reported that 23-year-old Ariana Bedka of Wappingers Falls apparently lost her balance at the top of the falls and fell 150 feet to the bottom at around 7 p.m. on Tuesday, July 29.

Tannersville Assistant Fire Chief Stephen Tuomey told the newspaper hat the woman was visiting the falls with a friend — she was unfamiliar with the terrain and shoeless at the time of her fall.

This is the second death at Kaaterskill Falls this summer. On June 30, a Beacon woman died after falling 70 feet from the falls.

Additionally, Tuomey told the paper that rescue crews have responded to 10 calls from Kaaterskill Falls this summer.

On Sunday, two days before the most recent fatality, New York State Senator Cecilia Tkaczyk met with Tuomey, members of the New York-New Jersey Trail Conference, the New York State Department of Environmental Conservation (DEC) and other local leaders to assess the dangers of hiking at Kaaterskill Falls.

The group toured the falls and discussed the dangers that visitors, particularly tourists unfamiliar with the Catskills, face when hiking the trail.

To increase safety at the falls, officials suggested having a shuttle bus ferry visitors from nearby Palenville and Tannersville to the two parking lots at Kaaterskill Falls. Tkaczyk and Hunter Town Councilman David Kukle both supported the idea, according to another story in the Daily Mail.

The shuttle would be an opportunity to educate hikers about the trail and the importance of proper footwear, Tkaczyk said. A shuttle would also cut down on the number of cars in the parking lot, which is often filled to capacity, causing some visitors to park on the narrow road next to the falls, which Tkaczyk said is a safety concern.

On Wednesday, Tkaczyk issued at statement about the latest death.

"My thoughts and prayers are with the family of this young woman," Tkaczyk wrote in an emailed statement. "Just two days ago I met with State and local officials and EMS workers to discuss safety concerns in the area, and will be following up with local officials early next week. In the meantime, I urge all hikers to stay on the marked trails and to wear appropriate footwear when hiking."

Correction, 7/30/14: An earlier draft of this story reported that the woman who fell to her death at Kaaterskill Falls on Tuesday was from Putnam County. She was from Dutchess County.