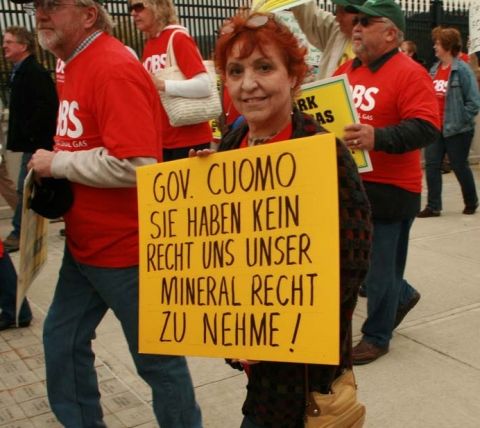 Above: Inge Grafe-Kieklak, plaintiff in a recent lawsuit challenging a Sidney town moratorium on gas drilling, demonstrates at a pro-drilling rally in Albany on Oct. 15, 2012. Grafe-Kieklak's sign, written in her native German, translates: "Gov. Cuomo, you have no right to take our mineral rights!" Photo taken by pro-drilling blogger Andy Leahy of NY Shale Gas Now; reproduced by permission.

A state judge struck down the town of Sidney's recently-passed moratorium on gas drilling last week, ruling that the town failed to follow proper procedure in enacting the law.

The decision has been hailed by pro-drilling advocates as a victory. But because of its narrow focus, the Sidney case is unlikely to have much impact on the larger legal question of whether towns have authority to regulate gas drilling within their borders -- an issue that is still yet to be heard by the New York State Court of Appeals, the state's highest court.

Sidney's rocky road to a moratorium

Sidney's gas drilling moratorium has been deeply controversial in the town -- and among Sidney town board members -- since it was first proposed several years ago. Among the law's opponents were some who worried that an anti-gas law of any kind would discourage Amphenol, an aerospace manufacturer whose Sidney plant is one of Delaware County's largest employers, from rebuilding their flood-damaged facility in the town.

The law has also drawn opposition at the county level. In February of 2012, a draft of the proposed law was sent to the Delaware County Planning Board for review. The board voted to disapprove the proposed law before it had been enacted, and sent a strongly-worded letter to the Sidney town board listing several reasons for the disapproval.

Under normal procedure, a zoning law that is disapproved by the county planning board requires a "supermajority" of at least four votes from the five-member town board in order to pass. But attorney David Slottje, an anti-drilling activist who helped draft Sidney's law along with his wife Helen Holden Slottje, advised supporters that the planning board did not have authority to require the supermajority in this case.

Opponents of the law put another roadblock in its path: A petition from local pro-drilling landowners, who appealed to a town law that requires a supermajority to enact any land use law over the objection of landowners who collectively represent over 20 percent of the affected acreage.

Despite both of these separate attempts to require a supermajority, the Sidney town board passed the moratorium by a simple majority of 3-1 in February of 2013, setting the stage for a legal challenge on the grounds that the law was not properly passed.

The suit against the Sidney law was brought by two local landowners, Inge Grafe-Kieklak and Concetta Martinucci -- although Martinucci was found by the court not to have legal standing to bring the case, since she did not prove that she owned land in the town.

In a short four-page decision on Jan. 8 (embedded below), Acting Supreme Court Justice John Lambert ruled to strike down the law on the grounds that it had not been properly enacted. Because of the landowners' petition, Lambert ruled, the supermajority was required to pass the law. Lambert also wrote that the town had acted improperly in not referring the law to the town's own planning board for review.

In the decision, Lambert explicitly avoided the question of whether towns have the authority to ban gas drilling through zoning and local land use regulations.

"Inasmuch as Local Law No. 1 of 2013 was improperly enacted, the Court has not addressed the moratorium issue," Lambert wrote.

The town is unlikely to appeal the decision, since the newly-elected board members are mostly opposed to the law, the Daily Star's Joe Mahoney reports.

Wider impact of the ruling

Attorney Kenneth Kamlet, who represented the petitioning Sidney landowners, told several media outlets this week that the Sidney decision was a hopeful one for the pro-drilling side. Kamlet also represents pro-drilling interests in another home-rule case in Binghamton; the city's newly-elected mayor recently announced that his administration would not seek to appeal a lower court decision to strike down a citywide ban on gas drilling.

Kamlet told the Daily Star that the cases are a first for pro-gas landowners in New York:

“These two cases are the first rays of sunshine that they have experienced,” Kamlet said. “They are the only two successful challenges to gas drilling bans or moratoria in New York.”

Capital New York's Scott Waldman, reporting on both the Sidney and Binghamton cases, writes that the Sidney decision establishes that "a town needs a supermajority to impose a moratorium on drilling."

But this is unlikely to be true for all towns, since the requirement for a supermajority in Sidney was triggered by particular circumstances in the town. A writer for pro-drilling blog Marcellus Drilling News gave Lambert's decision a mixed review:

...although this was a good decision and a reason to be happy, it wasn’t a jump-up-and-down-let’s-celebrate decision that seals of the fate of fracking moratoriums in NY.

Earthjustice's Deborah Goldberg, a lawyer who is involved in the defense of the Middlefield and Dryden drilling bans, told the Daily Star that the ruling was unlikely to have any impact on other town bans:

“The oil and gas industry is making a big to-do about nothing,” Goldberg said in a telephone interview Wednesday. “These cases are going to have no impact whatsoever on the cases involving Middlefield and Dryden.”

Two other towns in Delaware County have anti-drilling laws on the books: Andes and Meredith, both of whom passed bans on heavy industry in 2013. Andes passed its ban in February; Meredith's ban was passed in December. Both laws were passed by a supermajority; in each case, the vote was 4-0, with one member of the town board absent. Neither the Andes nor the Meredith law was drafted by the Slottjes.

Legal analysis of the case by Kenneth Kamlet, lawyer for the pro-drilling side of the Sidney case

Below: Justice John Lambert's decision in the Sidney case.