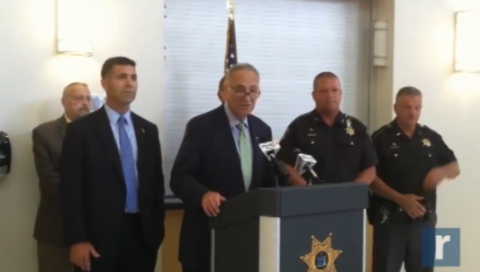 Above: A screenshot picture of Senator Charles Schumer speaking Tuesday at the Ulster County Law Enforcement Center from a Times Herald-Record video of the press conference.

At a press conference held at the Ulster County Law Enforcement Center on Tuesday, U.S. Senator Charles Schumer called for a federal designation of Ulster County as a “High Intensity Drug Trafficking Area.”

According to the Daily Freeman, Schumer, D-N.Y., has asked the President’s Office of National Drug Control Policy to give Ulster County the designation — which would increase resources that would help local law enforcement fight the growing heroin problem.

Schumer cited statistics from the Ulster County Sheriff’s Office: annual heroin seizures have tripled since 2007, drug related arrests are on pace to increase by more than 25 percent this year over last and more than a 1,000 bags of heroin were seized in April alone.

“Simply put, more must be done to curtail the spike in heroin use,” Schumer said

According to the Freeman reporter Ariel Zangla, Schumer added the classification would provide funding for “intelligence-sharing initiatives, drug prevention and treatment initiatives, and general support for programs that provide assistance to law enforcement beyond their normal scope of duty.”

Schumer said authorities in a High Intensity Drug Trafficking Area develop a strategy that addresses the drug-trafficking threat, proposes funding for their initiatives and prepares an annual report on its performance.

Ulster County Sheriff Paul Van Blarcum told the Freeman that while local authorities already work together, federal funding would allow for those teams combating drug traffic to increase in size.

Before the High Intensity Drug Trafficking Area designation can be placed, the county has to apply.

Schumer said Westchester and Orange counties are the only in the Hudson Valley to have received the designation.

This weekend: Rails to the Catskills premiere