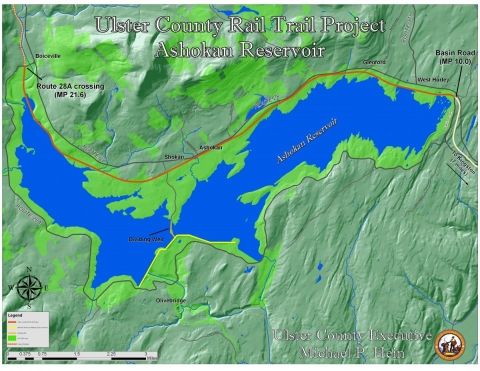 Above: A map of a proposed 11.5-mile walking and biking trail near the Ashokan Reservoir, on an Ulster County-owned railroad track that was once part of the Ulster & Delaware railroad and is currently leased to the Catskill Mountain Railroad. Map from Ulster County's website.

The Open Space Institute (OSI) will use private funds to create plans for an 11.5-mile multi-use rail trail near the Ashokan Reservoir, according to an announcement issued Thursday by Ulster County executive Mike Hein.

The recent announcement is a step forward for the proposed trail, which got a major boost last December when the New York City Department of Environmental Protection (DEP) agreed to put $2.5 million toward building it. The DEP has also agreed that the trail would be open year-round and would not require a city-issued permit for access.

The Ashokan trail would run along a railroad right-of-way that was once part of the Ulster & Delaware Railroad, and is currently leased from Ulster County by the Catskill Mountain Railroad, although no trains currently run on that section of the rail corridor. Hein and trail advocates in Ulster County are seeking to transform most of the old Ulster & Delaware railbed into the Catskill Mountain Rail Trail, a walking trail that would extend 38 miles from Kingston to Highmount. The Ashokan trail would be a key piece of the larger trail, running from the western edge of the reservoir near Boiceville to Basin Road in West Hurley.

If built, the Ashokan rail trail would also put an end to another vision for local tourism: Restoring train service from Kingston to Shandaken. Hein's rail trail plan faces fierce opposition from the Catskill Mountain Railroad and its supporters, who are locked in a legal battle with the county over the future of the county-owned rail corridor. As proposed by Hein, the trail would force the railroad to give up its short working segment of track in Kingston, and give up all plans for reuniting the two working ends of the track. Near the Ashokan Reservoir, the railroad right-of-way is too narrow to support both a working railroad and a trail alongside.

So far, no detailed plans have yet been issued for any segment of the proposed Catskill Mountain Rail Trail. This week's announcement of a study to plan the Ashokan section is the first public glimpse of the process for planning, engineering and funding the trail.

Public input will be taken during the study from local residents, businesses and communities that lie along the trail, Hein said.

The study will be paid for with funds raised for the project by OSI, Hein said in a news release that named the Woodstock Land Conservancy and the Dyson Foundation as major donors, along with local residents Rob and Eileen Rominger, Floyd Lattin, Ward Mintz and Bill Collins. The OSI has commissioned Syracuse engineering firm Barton & Loguidice to conduct the study.

The study is expected to cost about $150,000, OSI spokesperson Jeff Simms told the Watershed Post.

For trail advocates and the OSI, the Ashokan rail trail and the larger Catskill Mountain Rail Trail are part of a bigger project: The goal of building a vast, interconnected network of rail trails that extends into the Hudson Valley and across the popular Walkway Over The Hudson. That project hit another major milestone last summer, when the Rosendale Trestle -- which was once another key piece of local railroad infrastructure -- was reopened as a walking bridge on the Wallkill Valley Rail Trail.

"As we celebrate our recent completion of the Rosendale Trestle and extension of the Wallkill Valley Rail Trail to the City of Kingston border, OSI is delighted to put its shoulder behind this tremendously exciting project and partner with the County in developing a world-class rail trail network in Ulster County,” said Erik Kulleseid, Senior Vice President of OSI. “County Executive Mike Hein has shown leadership and vision in advancing this rail trail project, and OSI looks forwards to partnering with the County to create an extraordinary rail trail park that connects the City of Kingston to the Ashokan Reservoir and beyond and eventually links to the Walkway Over the Hudson.”

The Woodstock Land Conservancy also issued a statement of support:

“WLC is delighted to join with OSI and County Executive Hein and help privately finance this important planning study. The 11.5-mile linear park will create new connections between Route 28 businesses and local communities and open access for the first time in many generations to the beautiful forests and shorelines along the northern shore of the Ashokan Reservoir,” said Patty Goodwin, President of the WLC Board of Directors.