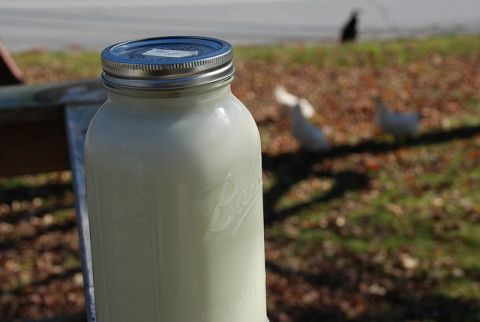 Two years ago, farmers Bob and Stacey Stap decided to start selling raw milk from their 100-cow farm in the Orange County hamlet of Pine Bush. It made sense: The price was higher than what they were getting from their processor, and customers were grateful to have it.

But lately, the Staps are thinking about getting out of the raw milk business. It's too stressful, says Bob Stap.

This week, the Staps have something extra to be stressed about: A recent sample of raw milk from Stap Farm was found to be contaminated with Listeria bacteria, the New York State Department of Agriculture and Markets announced Tuesday.

The milk sample was taken as part of a regular inspection on April 28. Stap Farm is licensed by the state to sell raw, or unpasteurized, milk, one of a few dozen farms in the state that are legally allowed to do so. In New York state, licensed raw-milk farms must undergo regular testing of their milk, and can only sell their milk on the farm, not in stores or at farmers' markets.

On Monday, May 5, laboratory testing confirmed that the sample from Stap Farm contained the bacterium Listeria monocytogenes. Listeriosis, a food-borne disease caused by the bacterium, is rarely serious in healthy children and adults, but can be harmful or fatal to pregnant women, the elderly, newborns and those with weakened immune systems. According to the CDC, about 1,600 people are sickened by listeriosis in the U.S. each year, and about 260 of those people die.

No illnesses have been traced to milk from Stap Farm.

On the day the sample was taken, Stap said, inspectors took five samples from the milk tank, four of which were free from bacteria. The farm has stopped selling raw milk until another round of testing comes back clean, Stap told the Watershed Post.

"Whatever was here was in such a minute quantity that it was only in one sample," Stap said. "It doesn't really seem right in my mind for them to say we had it in the milk, because they took a sample the week before, and we were fine. But we're living with what they're doing, we're complying."

For dairy farmers, who have no control over the federally-set price they are paid for their milk by processors, selling raw milk directly to customers can be a valuable sideline. The Staps decided to start selling raw milk in an effort to bring in some extra cash on the farm. Before applying for the license, they worked for months to make sure the farm was ready for higher standards and increased scrutiny.

"We spend more on sanitation. We've done a lot of work in our milking parlor," Stap said. "Our farm is presentable. And it has to be."

Lately, they've been having second thoughts.

"We're considering stopping [raw milk sales]," he said. "You get extra inspectors. People have to come to the farm to buy it...We've already discussed just getting five more cows and making money the way we're good at."

The Staps have been farming in Pine Bush for about 30 years. Together, Robert and Stacey, who have no farm employees, milk about 100 cows, most of whose milk is sold to a processor and pasteurized. The raw milk makes up a tiny percentage of the farm's business, Stap said.

"I sell about the milk of one cow a day [as raw milk]. About one percent," he said. "It's a niche thing, it's kind of nice. People give us Christmas cards when they get their milk. People appreciate it. We have quite a few older customers who grew up on raw milk."

A few farms in the Catskills, to the north and west of Stap Farm, sell raw milk directly to customers. One is Byebrook Farm, in the Delaware County hamlet of Bloomville. Another is Dirie Dairy, a longtime family farm in Livingston Manor that began selling raw milk a few years ago.

The income from raw milk sales is important to the farm, said farmer Maryann Dirie, whose husband Richard Dirie grew up on their 48-cow farm.

"It puts food on the table and gas in the car," she said.

The Diries decided to get into raw milk after two bad years in 2008 and 2009, which were especially tough times for dairy farmers: Hard on the heels of the stock market crash, the price of milk collapsed as well.

"Those were rough years," Dirie said. "Richard said, 'What are we going to do to bring in extra dollars?' We drink the [raw] milk in our house, when our kids have their friends over, they like the milk. So Richard asked the food inspector, 'How do we start doing this?'"

Much of the Diries' milk is sold to Dairylea for pasteurization. The farm's raw milk business is seasonal, she said; most of their customers are second-home owners who come upstate in the summertime.

Dirie says her farm has never had a problem with a contaminated sample.

"They've never shut us down. It's always showed good," she said.

Raw milk is a controversial issue among local food and public health advocates. Supporters of raw milk often claim that the enzymes in the milk, which are destroyed by pasteurization, have valuable health benefits. But raw milk can also carry disease-causing bacteria and other pathogens. Illness from raw milk is rare, but when it happens, it can be very serious.

As the popularity of raw milk rises, illnesses associated with it are rising too, the Washington Post reported earlier this year.

Aside from the health controversy, raw milk is also seen by many local food advocates as a way for small farmers to achieve more economic independence by selling directly to consumers.

But Stap cautions against the idea that selling raw milk can solve the problems of New York state's shrinking corps of dairy farmers.

"I really don't think raw milk is the savior of the family farm," he said. "If you can't make a living farming, don't get into raw milk."