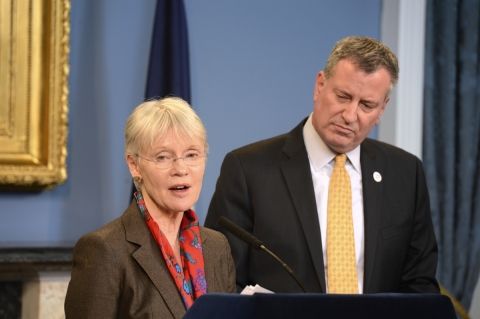 Lloyd headed the DEP from 2005 to 2008 under former mayor Michael Bloomberg. She resigned from the post in October of 2008, in a move that drew some speculation at the time about whether her departure was connected to controversy over the ballooning costs of the agency's Croton filtration plant.

Since leaving the DEP in 2008, Lloyd has worked as chief operating officer of Trinity Real Estate and, more recently, as president of the Prospect Park Alliance.

In a press release about Lloyd's appointment, de Blasio praised her experience, calling her a "veteran of city government," and noted that Lloyd would be tasked with making sure the city's aging water infrastructure is equipped to handle the stress of increasingly fierce storms.

At her City Hall appointment on Tuesday, Lloyd spoke about the DEP's role in making New York City more resilient against intense weather and the effects of climate change. Staten Island Live reports:

To local officials who work closely with the DEP, Lloyd will be a familiar face. Alan Rosa, executive director of the Catskill Watershed Corporation, said that he was pleased about Lloyd's appointment, and had praise for her work during her previous term. Under Lloyd's leadership, Rosa said, the DEP began to increase recreational access to lands and reservoirs in the city's upstate watershed -- a dearly-held goal for local town officials and for the CWC.

"She was the one who actually got the recreational use stuff rolling, and got a lot of the city lands open," Rosa said. "She got the pilot program started for boating."

Now in its fifth year, the DEP's recreational boating program allows kayaking, sailing and canoeing on the Cannonsville, Neversink, Pepacton and Schoharie reservoirs. In 2013, the DEP began allowing boat rental companies to store kayaks and canoes at the reservoirs. Local officials have hailed the boating program as a lure to draw tourists to the Catskills, and a boost to the local economy.

Lloyd's appointment may also be welcome news to the environmental community. In a blog post about her appointment, Eric Goldstein of the Natural Resources Defense Council wrote that Lloyd is a "savvy government veteran" with the chops to do the job:

The incoming commissioner, who is well-known to NRDC’s New York staff, is a solid and welcome choice. She can hit the ground running. And she is returning to lead the Department of Environmental Protection with a deep reservoir of experience in local government and a lifelong commitment to New York City.

The post of DEP commissioner has been something of a revolving door since Lloyd's departure in 2008. Lloyd replaces outgoing commissioner Carter Strickland, who was appointed to the post in 2011. Before Strickland, the job was held by Cas Holloway.