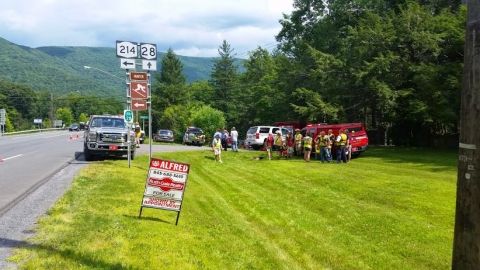 Dive teams, firefighters, and first responders mobbed the Esopus Creek in the Ulster County village of Phoenicia on Sunday afternoon in what turned out to be a wild goose chase.

A report of an injured person in the creek on August 10 prompted a massive emergency response, according to an email from George Neher at the Shandaken Police Department.

Traffic was slowed to one lane on Route 28 as ambulances and first responder vehicles, several pulling boats, lined the roadway near the creek around 2 p.m.

But the first responders did not find any injured person in or near the creek. A police officer directing traffic told a reporter that it all seemed like a false alarm.

As it turned out, the injured person had already left. A tuber had injured his hip and lost his inner tube while tubing the Esopus that day, prompting someone nearby to call the police, according to Neher.

But the man left the creek himself before emergency personnel found him. Witnesses told the police that he walked to his car, which appeared to be a Mercedes-Benz, and drove away, according to Neher.