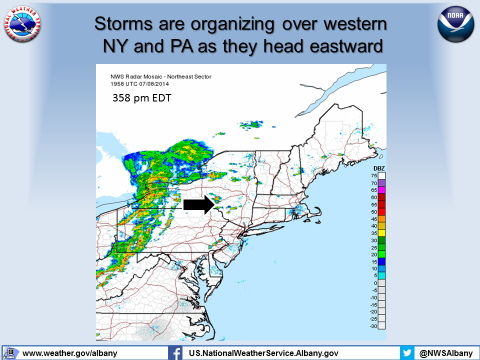 Look out, Catskills: Yet another round of thunderstorms is taking aim at the region, with the possibility of high winds, damaging hail and even the chance of a tornado.

As of late Tuesday afternoon, a line of storms is organizing in western New York and Pennsylvania, and moving steadily eastward across the region. A severe thunderstorm watch is currently in effect across Central New York, including Delaware County in the Catskills region, until 8 p.m.

Storm trackers at the National Weather Service caution that there is a slight chance the storms could spawn a tornado or two as they swirl across Central New York.

The eastern Catskills are not yet under severe weather watch, but thunderstorms are expected this afternoon and evening. Locals should keep an eye on the weather as the storms move eastward.

Over the past couple of weeks, the Catskills, along with the rest of upstate New York, have been hammered with thunderstorms and heavy rain. Last week, flash flooding broke out in Sullivan County, forcing some evacuations and causing over $2 million in estimated damage. Thunderstorm activity in the Northeast is higher than usual this year, NWS Albany forecasters report, because of an unusually strong jet stream.

Update: As of 6:35 p.m., the NWS's severe weather watch has been expanded to include an area that spans all of east-central New York and into western New England. All Catskills counties -- Delaware, Greene, Schoharie, Sullivan and Ulster -- are under severe thunderstorm watch until midnight.

Do you have flooding or weather damage near you? Let us know at editor@watershedpost.com.