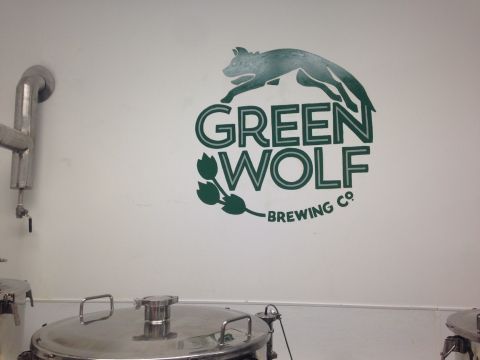 When Justin Behan’s wife was in her later stages of pregnancy, she told him about a dream she had one night: a green wolf walking through their property.

Around that time Behan, a brewer of craft beer, was putting every word he could think of in front of “Brewing Company” to try and name his business, all while working on his own beer recipes in his kitchen.

And Green Wolf Brewing Co. worked— from its Latin roots (the word for hops comes from the latin word for wolf), his strong environmental ethos, his need for money to stay afloat and its ties to the Middleburgh school’s colors.

Left:  A few of Green Wolf's beers in their taproom.

It seemed like the right call for his farm brewery located at 315 Main St. in Middleburgh.

“I want [Green Wolf Brewing] to be a community place: a real destination for locals and those just visiting," Behan says.

The village of Middleburgh will have no empty storefronts along their Main Street by the fall, which is rare for the area when there’s no college near by, Behan says.

With his taproom featuring a half-dozen styles of beer he brewed himself — fun brews like the "Dire Wolf" and "Raven" were named with "Game of Thrones" in mind — made from Capital region and New York State-sourced ingredients,  Behan says he’s hoping to “add a new and powerful dimension” to the local business scene.

When the location is officially up-and-running he plans to host live music events and to network with other local beer-makers, to find new ways  to make folks passing through the “crossroads community” stop in for a drink.

Green Wolf is part of a larger-scale campaign called Brew Central, which aims to bring Central New York’s makers of craft beer, hard cider and spirits together. Ads featuring his business will soon be placed in national beer magazines including Beer Advocate, Beer Connoisseur and All About Beer.