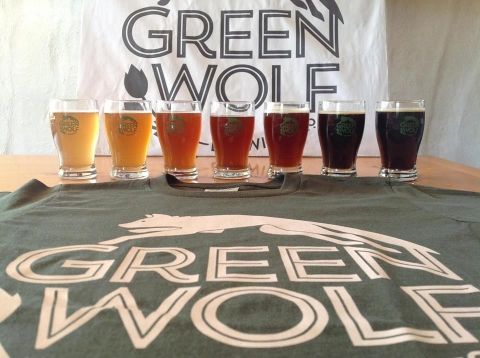 The Green Wolf Brewing Company, Schoharie County's newest microbrewery, is slated to open this winter. Or at least it was, until Congressional Republicans refused to pass a routine spending bill without changes in the new healthcare law, launching the nation into a federal shutdown that is now nearing the end of its second week.

Behan is currently waiting for a response to an application from the Alcohol and Tobacco Tax and Trade Bureau, or TTB, as it's known. He may be waiting a long time.

"We submitted our forms to the TTB, the federal government's wing that takes care of brewery regulations, about a month ago," Behan said.

Even under ordinary circumstances, Behan said, getting approval from the TTB to open a new brewery could take a couple of months. But with Green Wolf's application now in limbo, and a backlog of work piling up at the TTB, it's anyone's guess how long Green Wolf will have to wait. Meanwhile, the brewery's startup costs are adding up: monthly payments for business loans, rent payments on the brewery's Main Street space that will begin in December.

"We're not making an income. The longer we're delayed, the longer it is for us to make any kind of a profit," Behan said. "We're bleeding cash right now."

Green Wolf isn't the only small brewery that's having problems because of the shutdown. According to a recent news report by the Associated Press, brewers across the country who need TTB approval to open new breweries or even launch new beer labels have been stymied by the shutdown. Industry advocates are worried about the shutdown's impact on American brewing, the authors report:

"One could think of this shutdown as basically stopping business indefinitely for anyone who didn't have certain paperwork in place back in mid-August," said Paul Gatza, director of the Brewers Association, which represents more than 1,900 U.S. breweries.

"It's not just me, it's breweries across the country," Behan said. "There are more breweries opening now than at any point in the history of the US."

In New York State especially, new microbreweries and distilleries have been opening at a rapid pace in the last several years, fueled in part by state legislative efforts to nourish the growing industry. According to a report from the Buffalo News, New York State was home to 131 licensed breweries as of the summer of 2013, most of them small craft breweries.

Once Green Wolf's federal application is approved, Behan said, the brewery will have to apply separately to New York State for licensing. But the state process cannot even start until the federal process is complete, he said. Behan's business partner, father-in-law Chuck Manning, has been trying to find out if the state Liquor Authority will consider the brewery's application ahead of time.

"I think it's a little bit of wishful thinking, but maybe they can start reviewing our forms," Behan said.

Once the brewery gets its license, Green Wolf plans to open a taproom at the brewery's future home on Main Street in Middleburgh. Behan is excited about the brewery's prominent location in the village, which has made a dramatic comeback since it was devastated by Irene flooding in 2011.

Behan is also working on some innovative ways to brew and market his products. Green Wolf is planning a beer subscription program, much like a CSA farm share, that will offer shareholders a 22-ounce bottle of ale once a week for three months. Behan is also interested in brewing with local ingredients; he has a particular interest in heirloom hops, which were a major crop for New York State a century ago, and can still be found growing wild in the region long after the farmers who planted them gave up the ghost.

"I said, 'Look, not to toot our own horn, but we're one of the most exciting businesses to open up in Schoharie County for a long time, and it's hurting your constituency for you to be backing the shutdown along with your fellow Republicans,'" Behan said.

Below: Future home of the Green Wolf Brewing Company at 315 Main Street, Middleburgh. 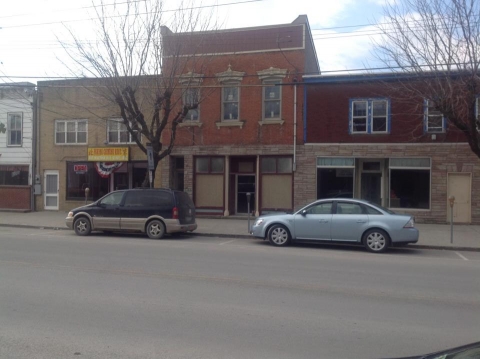