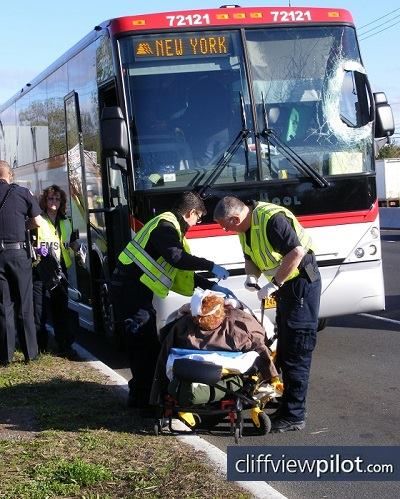 Above: An injured victim being treated at the scene of this morning's bus accident on Route 17 in Ramsey, N.J. Photos by Boyd A. Loving; courtesy of the Cliffview Pilot.

A flying car wheel smashed through the windshield of a Pine Hill Trailways bus bound from Kingston to Manhattan on Route 17 around 7:30 this morning, injuring four people, according to several downstate media reports.

The wheel flew off a Lexus that was driving north, in the opposite direction from the bus, the Cliffview Pilot reports. Two people aboard the bus were critically injured in the accident, and two others sustained head injuries.

One of the injured victims was airlifted to a hospital, and a few others were transported by ambulance, NorthJersey.com reports.

News 4 New York spoke with an Accord passenger who said that his seatmate had been injured in the accident:

Passenger John Ditmars, who was heading to Manhattan from Accord, N.Y., said his seatmate in the front row was badly hurt.

"The wheel was traveling really fast -- it actually smashed the window, struck the bus driver, ricocheted off the ceiling of the bus and struck four more passengers," he said.

The uninjured passengers were picked up by another Trailways bus around 9 a.m., the Bergen Record reports.

Update, 12:50 p.m.: One of the injured victims was the bus driver, who managed to pull the bus over safely and help bus passengers after being hit by the flying wheel, the Daily Freeman reports:

After the windshield was smashed by the tire, the driver was able to maneuver the bus to the side of the road before calling for assistance, Noonan said. She said the driver and another Trailways bus driver, who happened to be on board as a passenger, assisted passengers at the scene.

Noonan said the driver of the bus is “very experienced” and “our second most senior driver.”

Update, 3:15 p.m.: The critically injured passenger who was airlifted from the scene is a 49-year-old man from Rosendale, CBS New York reports.

Below: More photos from the scene, courtesy of cliffviewpilot.com. 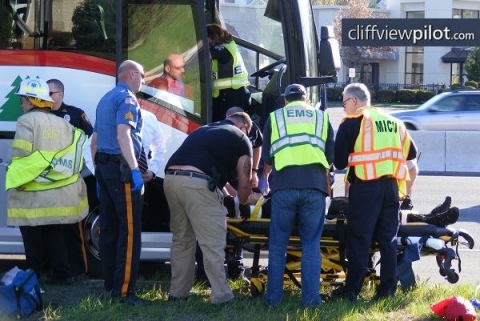