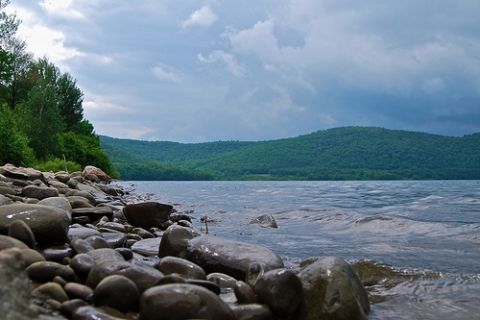 A sound that won't be heard on most of New York City's reservoirs this summer: The whir of electric trolling motors.

In 2013, the city Department of Environmental Protection, which manages New York City's upstate reservoirs, began allowing anglers to use electric motors at the Cannonsville Reservoir as part of a pilot program. Billed as a way to allow anglers to reach more of the reservoir, and also open up more reservoir access to disabled people who want to fish, the program issued 112 tags to anglers during the 2013 fishing season.

If the electric motor program goes smoothly, the agency's plan is to expand it to several other reservoirs in the watershed, following the path of a recreational boating program that now allows kayaking, canoeing, rowing and sailing on the Cannonsville, Pepacton, Neversink and Schoharie reservoirs.

But hang onto your oars, fisherfolk. The DEP is proceeding cautiously, concerned about the possibility that invasive species could spread to the reservoirs through motors that have not been properly steam-cleaned. The electric trolling motor program won't expand beyond the Cannonsville this year -- and officials are tightening up access on the Cannonsville to make sure all gear that goes into the reservoir is clean.

"There were some challenges we'd like to solve before we expand the program to other reservoirs," said DEP spokesperson Adam Bosch. "We want to be extra cautious, especially given the invasive species concerns, that all these boats and motors are up to the standard of cleanliness for the program."

All boats that go onto the city-owned reservoirs, and their motors, must be steam-cleaned before touching the water, to prevent the spread of invasive plants and animals that could interfere with equipment or water quality in the reservoirs. In 2013, the DEP allowed anglers to get a season-long electric trolling tag, permitting the holder to steam-clean a boat just once, and keep it at the reservoir throughout the season.

While examining boats that had been left at the reservoirs last year, Bosch said, DEP workers found some boats from which the motors had been removed. DEP officials worry that if motors are taken off their boats, they could be used in another water body without being cleaned, opening a pathway for invasive species to enter the reservoir.

This year, the agency will no longer offer season-long tags for electric trolling motors, issuing only two-day tags instead. The motors on boats with two-day tags must be removed from the reservoir after the permit period, and steam-cleaned again before they are allowed back onto the water.

The DEP will host a meeting to discuss the results of the first year of the electric trolling motor pilot program, and give out information about the upcoming boating season, at 6 p.m. on March 20, at the Tompkins Town Hall in Trout Creek.

The 2014 electric trolling motor program will begin on opening day of fishing season, April 1 -- provided the Cannonsville is ice-free -- and run through Nov. 30.

Correction, 3/27/14: A previous draft of this story stated that boats with two-day tags must be removed from the reservoir and steam-cleaned before being allowed back on the water. In fact, only the motors need to be removed and steam-cleaned after each two-day period covered by the tag. Apologies for the error.