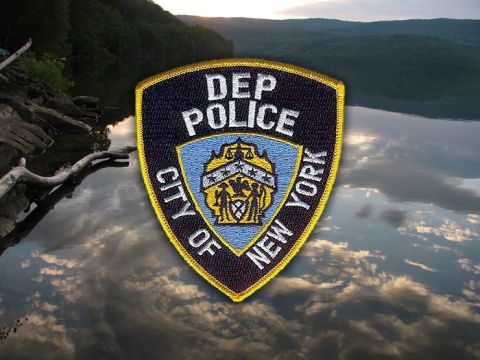 Photo illustration. The reservoir in the background is the Pepacton in Delaware County; photo by Timothy Cox, shared in the Watershed Post's Flickr group pool.

The DEP police contract -- the first labor contract signed under de Blasio's administration -- follows almost a decade of wrangling over the status of the DEP's officers, who have long performed many of the duties of police without the same level of benefits as other city police officers.

Last July, a state judge ruled that the DEP officers should be treated like other uniformed law enforcement, upholding a ruling made in arbitration between the DEP cops and the city -- an unlikely win for the officers. But despite the judge's ruling, no final contract was signed between the officers and the administration of then-mayor Michael Bloomberg. It took the election of a new mayor to get the contract the DEP officers had been waiting nine years for.

The New York Daily News reported the news of the agreement between de Blasio's administration and the Law Enforcement Employees Benevolent Association (LEEBA), which was signed on Thursday, Feb. 13. The agreement will increase the DEP officers' uniform allowance and night-shift pay, make them eligible for paid leave if they are injured in the line of duty, and grant them retroactive pay raises on par with those given to officers in the New York Police Department in 2005, 2006 and 2007.

Kenneth Wynder, president of LEEBA, told the Daily News that the officers had been treated fairly:

"We got treated with respect," he said. "We felt much better compared to the nine-year battle we had with the old administration," he told the Daily News.

The Daily News's Celeste Katz writes that the agreement "could signal a smoother period of labor relations after the cold war between the unions and Mayor Michael Bloomberg."

The DEP's watershed officers are frequently called upon by local police to help out in everything from car accidents to manhunts, and several have been injured on the job in recent years. In the comment section of the Daily News story, a DEP officer showed up to chastise a sarcastic commenter who joked about the "tough job" of rural cops who "could get attacked by a rabid racooon":

Are you aware that terrorists have been found with maps and information about NYC's water supply? And while I never got attacked by a rabid raccoon, I have gone to many domestics, have searched for missing persons, responded to fatal car accidents, suicides, dealt with mentally ill individuals, responded to chemical spills, walked up ice covered mountain roads at night while setting up flares in response to car accidents or disabled vehicles. One Sergeant almost lost his house after suffering injuries after his patrol car rolled over as he was responding to a violent domestic. Another young officer was permanently disabled after an accident while patrolling an aqueduct and I actually broke my back while doing swift water rescue training.