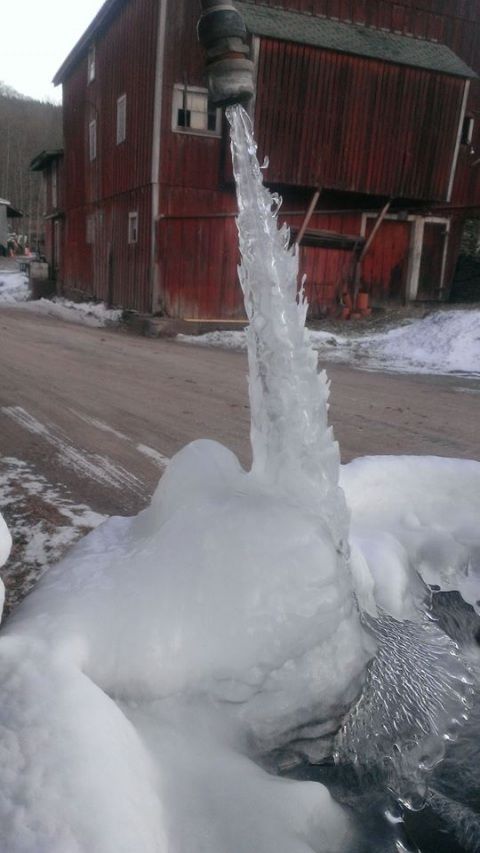 Above: A running spigot at Hubbell Bros. in the Delaware County town of Middletown gets the polar vortex treatment. Photo taken on Wednesday by Watershed Post reader Burr Hubbell, who writes, "The water's still running inside that icicle thingy. It's just frozen on the outside."

The Northeast is thawing out this weekend, after several days of intense subzero cold. In the Catskills and across a wide area of upstate New York, a combination of rain in the forecast and melting snow and ice from rapidly-warming temperatures has the region under flood watch from Saturday afternoon to Sunday evening.

Temperatures across the region are expected to rise into the upper 40s and lower 50s Saturday. Rain will fall throughout the day Saturday, with total rainfall of between half an inch and two inches expected across the region.

The biggest threat will be ice jam flooding on partially-frozen rivers, warns the National Weather Service in Binghamton, who issued a detailed briefing on the outlook for flooding on Friday morning. Major flooding is not expected on any main rivers, station forecasters said, although headwater rivers in the Delaware River basin may reach minor flood stage.

Ice jam flooding has already occurred on some rivers elsewhere in the state recently. In Ithaca, ice jams in the Cascadilla Creek and Fall Creek flooded some streets in the city earlier this week.

Because of the melt in the forecast, and high levels of water in the Ashokan Reservoir, the New York City Department of Environmental Protection (DEP) is releasing water into the Lower Esopus Creek, a process that was begun Thursday morning and will continue into Friday night. The reservoir was 89 percent full on Thursday morning, according to a statement issued by the DEP, and levels were expected to rise as snowmelt and rain pushed more water into the Ashokan's drainage basin.

City water officials say they are ramping up the releases slowly to reduce the risk of ice dams forming on the Esopus, and that they have consulted with Ulster County officials about the releases. Releases were slated to reach 150 million gallons a day by Thursday night, and to be at 300 million gallons a day by Friday night. The water currently being released from the reservoir is clear, at about 4.1 nephelometric turbidity units (NTU). The city's water releases into the Lower Esopus, which have been very controversial in Ulster County over the last few years, are governed by a recently-released consent order between the DEP and the state Department of Environmental Conservation (DEC).

In a statement to the Daily Freeman, Ulster County executive Mike Hein said that the county has asked the state DEC to monitor the creek for potential ice jams, and to put a halt to the releases if any ice jams begin to form. Hein also asked the DEC to make sure any ice jam data taken over the weekend is integrated into an upcoming environmental impact study about the Lower Esopus releases that the DEP is required to produce under the consent order.

Current DEP water releases are being tracked on the DEP's website.