The Adelaar has landed: Plans revealed for Concord casino 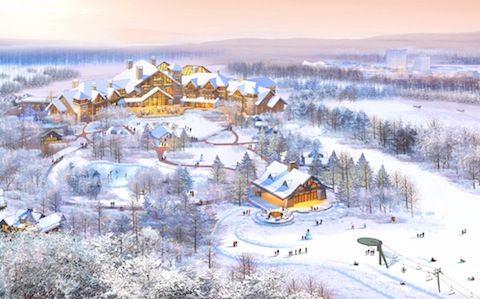 An artist's rendering of the Adelaar in winter. Source: AdelaarNY.com.

Developers unveiled plans today for a massive 1,700-acre casino and resort on the grounds of the Concord resort in Monticello. Backers of the $750 million project are betting on securing one of New York State's four casino licenses from the state Gaming Commission.

Dubbed the Adelaar -- Dutch for "eagle" -- the resort plans feature five hotels with 1,100 rooms, an indoor waterpark, an 18-hole golf course, an "entertainment village" with a movie theatre and shopping outlets, ziplines, a mountain coaster, and acres of trails and areas for hiking, boating, skiing, fishing and other outdoor recreation, according to a press release issued Thursday by developers EPR Properties and Empire Resorts.

The Times Herald-Record's Steve Israel is calling the project "the most spectacular development Sullivan County -- and perhaps the region -- has ever seen."

A slick new website for the project, AdelaarNY.com, was also unveiled, with detailed maps, renderings and other information about the planned resort.

Developers say the Adelaar will create 2,161 full-time and part-time jobs at the resort itself, and an additional 2,550 construction jobs while it is being built.

The project has support from many groups and businesses in the local area, including the town of Thompson (where Monticello is located), the Sullivan County Chamber of Commerce, the county Industrial Development Agency and the Bethel Woods Center for the Performing Arts.

Plans for casinos in New York State are moving ahead swiftly, under the state's new casino law and a referendum on casino gambling that was passed last November. Four casino projects will be chosen for licenses, with two likely to be sited in the Catskills.

This week, three members of the five-person Resort Gaming Facility Location Board -- a panel that will decide which projects will receive casino licenses -- were officially named to the panel by the state Gaming Commission. On the panel are former state budget director Paul Francis, Hofstra University president Stuart Rabinowitz and former New York City comptroller Bill Thompson. Two other members are likely to be installed soon, but have yet to be publicly identified, the Times Union reports.

The Adelaar announcement follows closely on the heels of some sobering news for Catskills casino supporters: Several developers are eyeing sites in Orange County, to the south of the Catskills and closer to New York City. Developer Louis Cappelli, who is both a major investor in Empire Resorts and a competitor seeking a casino license for a separate project, told the New York Times that an Orange County casino would be disastrous for the Catskills:

“It would be a devastating blow to everyone who’s been trying to revive Sullivan County for the past 40 years,” said Louis Cappelli, a developer who is seeking to build a $550 million casino resort in Monticello, at the former site of a borscht belt hotel, the Concord. “It would cut us off from the supply of patrons.”

Hoping for a casino