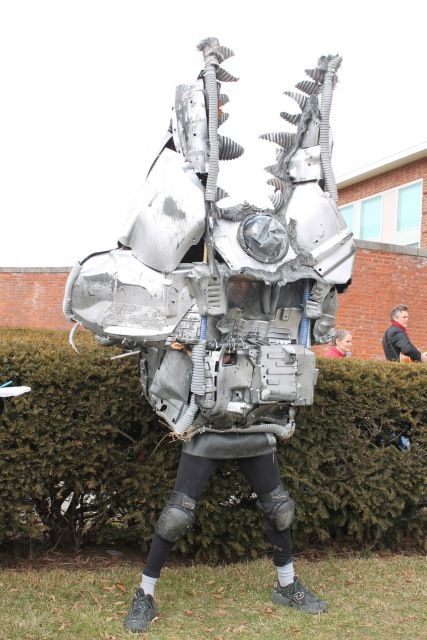 Above: We're not sure who Gagnacon is, but we know he wants Gov. Andrew Cuomo to restore $547,818 in state aid to the Onteora Central School District. Photo courtesy of Valerie Havas, a PR specialist for Onteora.

Among the attendees at a Boiceville rally held in protest of steep cuts in state aid to the Onteora Central School District on Saturday: State senator Cecilia Tkaczyk, former Woodstock supervisor Jeff Moran, local children's folksinger "Uncle Rock" Robert Burke Warren, and local parents and PTA representatives. Also a giant robot, who when pressed by a Times Herald-Record reporter, would identify himself only as "Gagnacon."

As the Times Herald-Record notes, Onteora faces a staggering state aid cut of over 7.6 percent in Gov. Andrew Cuomo's proposed 2013-2014 budget, at a time when the district's neediest population is on the rise:

The cuts come just as need is growing in the district. Onteora's free- and reduced-lunch population has grown from 22 percent in 2008-2009 to 37 percent today, McGill said; that's expected to rise to 39 percent once the 53-unit Woodstock Commons affordable housing complex is occupied.

For districts like Onteora, where local incomes are low but land values are high because of the market for second-home properties, this year promises to be especially tough. Cuomo has proposed steep cuts in so-called "high tax aid" that goes mainly to these districts.

In the Adirondacks region, another area with low incomes and high property values, state senator Betty Little is worried about the effects of the cuts. North Country Public Radio reports:

One pressing problem this session, Little said, is Governor Cuomo's plan to cut special funding for schools that appear to have strong property tax bases but are actually in relatively poor rural areas with low enrollment rates.

"High tax aid is given to a lot of the schools who have a large amount of property value, for instance lake front properties, but low wealth."

Overall, Cuomo's proposal calls for a 3 percent increase in state aid for education. But on the district level, there is huge variation on the proposed budget's effect on state aid levels. In a special report on Cuomo's school spending plan, WGRZ reports that about a fifth of New York State school districts are slated to get less state aid money in 2013-2014 than they did last year:

Under Cuomo's plan, 159 districts would get fewer state aid dollars than they did this year, which is about 22 percent of the state's roughly 700 districts, according to New York State United Teachers, a statewide union.

Onteora isn't the only local district facing cuts to state aid. In Delaware County, the Downsville Central School District is slated for a whopping 10.2 percent decrease in aid, losing $158,392 from last year's figure of $1,546,617.

Most local school districts will see more moderate increases or decreases in their state aid. To find information on how the Cuomo budget will affect your district, see the Gannett Journal News: The newspaper has an online, searchable database showing the proposed state aid figures, and the change in state aid by district compared to 2012-2013.

Cuomo and state legislators have not yet agreed on a state budget. In their own proposed budgets, issued earlier this month, both the Assembly and Senate sought to increase school spending by several hundred million dollars over Cuomo's proposal. 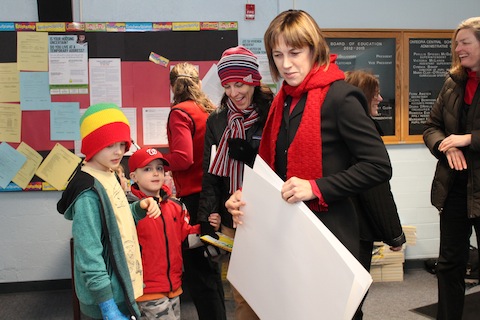