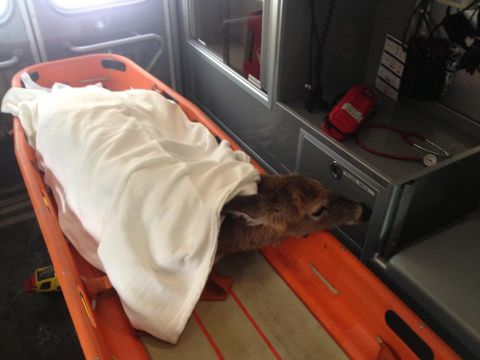 Photo of rescued deer posted on Facebook by the Lumberland Fire Department on Friday, January 4.

From the river edge of Sullivan County comes a dramatic rescue story: Last Friday, the Lumberland Fire Deparment rescued a doe who had fallen through the ice on the frozen Upper Delaware River.

The firefighters posted an account of the rescue on Facebook, which was widely shared. In their own words:

She was alive and in a 2 foot hole surrounded by ice. Bosco Hunt drove the boat, again checking for safety, James Steimle and Ann Schulte Steimle executed the rescue with a lasso and a plan. Jay and Ann grabbed the deer and hauled her on board while Bosco held the boat steady. Ann subdued her by laying on her. The deer was exhausted and cold. Upon getting to shore, our crew met us and quickly rubbed the deer down taking extra caution to keep her hooves under control. She was loaded on a stokes basket and transported to the firehouse to await animal control. Arriving at the firehouse she literally jumped up and was subsequently released!

According to a story in the River Reporter today, the rescue was a chance for the crew to test out their new Diamondback Airboat in action, which the fire department has had for only a few months. Fire department president Ann Schulte Steimle told the Reporter:

The Diamondback Airboat is the second one the department has owned. The first one was not really powerful enough for the river; but the new one surpassed expectations. “We were thrilled. We had put a lot of research into this Diamondback Airboat, we had put a lot of training into it, we had the guys that sold it to us come up from Florida and train our pilots. It did everything we wanted it to do plus more. The thing was steady as a rock. I’ve been on many, many rescues and recoveries on the Delaware myself, and I never felt like I was in any kind of danger; it was incredible.”

The local deer rescue went better than another widely publicized one that also occurred Friday, in Waltham, Massachusetts: A deer stranded on the Cambridge Reservoir was rescued by Waltham firefighters, but she was in such bad shape after spending the night on the ice that she had to be euthanized.