A juvenile bald eagle was shot and left to starve in Otsego County last week, according to wildlife rehabilitator Wes Laraway, who runs the New York Wildlife Rescue Center in the Schoharie County town of Middleburgh.

Shooting a bald eagle is a federal crime. The Bald Eagle Act of 1940 specifically protects the species, and shooting at a bald eagle is punishable by fines and prison time, according to the U.S. Fish & Wildlife Service.

Laraway, who has been rehabilitating wild animals and doing rescue work for 20 years, said that it is unlikely that such a shooting could be an accident.

The bald eagle that was shot is probably a three- or four-year-old female. She still has the brown head feathers of a juvenile, Laraway said.

Above: Wes Laraway treats a bald eagle that was shot in Otsego County last week. Photo courtesy of Wes Laraway.

She was found alive along the side of Williams Road in New Lisbon on Saturday, April 25, Laraway said. She had severe injuries to one of her wings which appeared to be caused by a gunshot.

She was also severely dehydrated and starving, Laraway said.

The eagle was pierced by several porcupine quills, possibly because she had tried to eat a porcupine in desperation, Laraway said.

The gunshot wound appeared to be several days old, he said.

“My guess is from looking at the wound that she was probably shot a day or two prior to Saturday,” Laraway said. “The wound was still relatively fresh. There was still some necrotic tissue and some dried blood.”

The eagle was brought to Laraway’s rescue clinic on Saturday night by a New York State Department of Conservation officer. Laraway treated her with an an IV to rehydrate her, wrapped her carefully to calm her and keep her still, and allowed her to rest until Sunday morning, when she was transported to Cornell’s Janet L. Swanson Wildlife Health Center.

There, the porcupine quills were removed and the eagle’s wing was partially amputated, Laraway said.

The eagle is doing well, but “she’ll be unreleasable,” Laraway said. “She’ll never be able to fly or hunt or survive in the wild again. At least she’ll be alive and she’ll make a great educational bird.”

"Cornell wildlife veterinarians have performed surgery on the bird and are watching it closely as it recovers," said Claudia Wheatley, a spokesperson for Cornell's College of Veterinary Medicine, in an email on Thursday, April 30. "Due to the nature of the wound and the surgery required to treat it, this bird will never be able to fly again and cannot be returned to the wild."

With the help of donors recruited through social media, Laraway is offering a $1,000 reward for information leading to the arrest of the person who shot the eagle. He hopes that the DEC will match the reward.

“This is something that my friends and the people in my network have put together to try to find whoever shot this eagle and bring them to justice,” he said.

Below: A reward poster created by Wes Laraway. 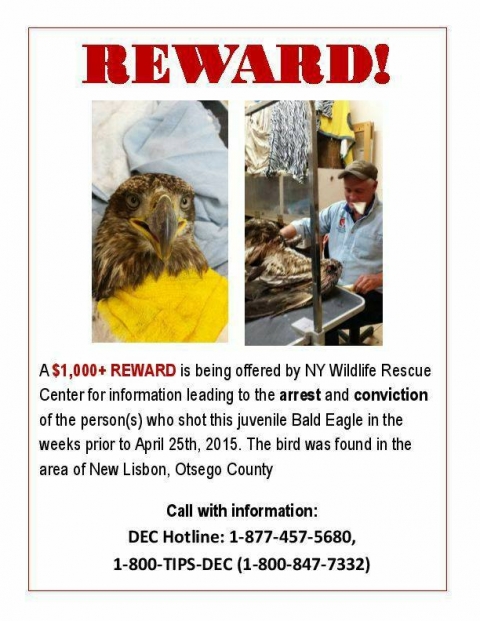