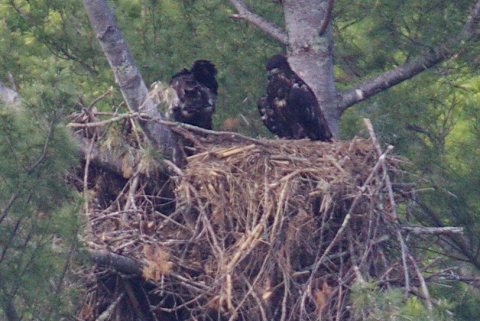 Above: Fledgling bald eagles at a nest near the Gilboa Dam on June 4, 2013. Photo courtesy of the NYC Department of Environmental Protection (DEP).

Weighing in at over 230 million pounds of concrete, with a $400 million price tag and a crew of over 100 workers, the restoration of New York City's Gilboa Dam at the Schoharie Reservoir is the largest and most ambitious construction project currently underway in the Catskills.

Not all the dam's regular visitors are on the payroll. In 2011, with work at the dam already well underway, a pair of bald eagles began building their nest nearby.

"That freaked everybody out. They did not expect eagles to start building a nest in the middle of a construction zone," said Peg DiBenedetto, a DEP employee who has been tasked with keeping a close eye on the eagles. "They built the nest in a vital part of the site."

For the last two years, DiBenedetto has watched the nest, taking careful daily notes on the eagles' behavior to make sure the construction isn't disturbing them.

This spring, the vigilance paid off: In April, two young eagles were hatched amid the bustle of trucks and machinery, and both have lived and thrived. Last Monday, the first fledgling left the nest for good.

Although the species has made a remarkable recovery, and was removed from the Endangered Species List in 2007, bald eagles are protected at both the federal and state level, and disturbing a nesting pair is still a criminal offense. When the eagles moved in, the DEP had to apply for a special permit from the U.S. Fish and Wildlife Service in order to keep work at the dam from grinding to a halt.

The eagles have caused several interruptions to the construction work. When the pair first moved into the site, a key staging area had to be moved farther away from the nest. Later, after flooding from Irene washed out an access road near the nest, the agency had to stop work while they applied for another permit -- this time, for intense work that had to be done very close to the nest in February of 2012, a critical time for the eagles.

"That's around the time when they're laying their eggs," DiBenedetto said. If they are disturbed during this crucial period, she said, eagles will often abandon a nest.

The eagles stuck around and stayed on their eggs, though they did not hatch. This year, their nest was a success, with two healthy young eaglets hatching.

Although the eagles have made for some fast-changing plans and a few delays on the site, the project is on track to finish ahead of schedule. And workers at the dam are proud of "their" eagles, DiBenedetto said.

"Most of the construction crew are really excited to have the eagles on site. I'll be alongside the road with my telescope, and they'll stop and say, 'How are the eagles doing?' 'What are they doing?' 'How old are they now?'" DiBenedetto said. "I think everyone on the site is pretty proud of the eagles, and kind of looks at them like a mascot for the construction project."

"Sometimes they're drawn to the territory. They're not fishing, they're looking. They tend to be genuiniely curious about what we're doing," DiBenedetto said. "Sometimes when the construction vehicles make squealing noises, it sounds close to an eagle vocalization. That could be one of the attractions for them."

The breeding pair at the Gilboa Dam is part of a larger success story for bald eagles, which were pushed to the verge of extinction several decades ago by habitat destruction and DDT poisoning. In 1960, the state Department of Environmental Conservation (DEC) could find only a single active bald eagle nest in all of New York State.

Bald eagles are now a fairly common sight along waterways in the Catskills. According to DEP spokesperson Adam Bosch, there are currently about 15 active nests near New York City's upstate reservoirs. Throughout the state, there are more than 170 nesting pairs, according to the DEC.

Trucks or no trucks, the reservoirs are good habitat for the fish-eating eagles, DiBenedetto said.

"The fishing opportunities are wonderful," she said. "There's no reason for them not to thrive here. They're doing very well."