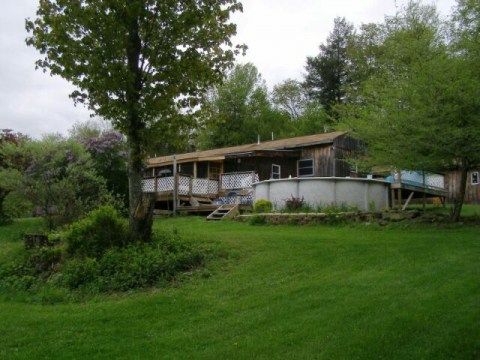 Above: A three-bedroom ranch house on 14 acres in Hancock that local realtor Leonard Piorkowski hasn't been able to get a bite for, despite a tempting $107,000 sticker price. Photo from listing on Klimchok Real Estate's website.

For some upstate New York landowners, a prime location atop the Marcellus Shale is a potential goldmine. For others, it's more like an albatross.

In today's New York Times, reporter Mireya Navarro digs into the issue of whether the fear of impending gas drilling is scaring off potential homebuyers in the Catskills. Among those she interviews is would-be second-home-buyer Arthur Gillett, who found the prospect of fracking in Sullivan County too rich for his blood:

Six months ago, Arthur Gillett, a resident of Greenpoint, Brooklyn, and the research director for a food sustainability business, found what he considered the ideal spot: a Cape Cod-style cottage with a garden on four wooded acres near Livingston Manor in Sullivan County. At $140,000, the price was right.

But Mr. Gillett, 32, let it go, deciding to search closer to parkland and reservoirs where state officials have promised that fracking will be banned, even if it is allowed elsewhere in New York.

Mr. Gillett said he did not believe that oversight by state regulators would guarantee safe drilling, and he worries about the accidental contamination of water supplies. “If you’re really looking for something for use for a long time,” he said, “the idea of the groundwater being bad is just disconcerting.”

It's worth noting that the places mentioned in Navarro's article lie close to, but still outside the borders of, New York City's unfiltered watershed, where the state has said no drilling will be permitted. Sources quoted in the story mention Livingston Manor in Sullivan County, and Hancock and Treadwell in Delaware County.

Towns near the Pennsylvania border, where drilling is most likely to be permitted, are hotly divided on the issue. Earlier this month, local blogging realtor David Knudsen, who worries about the impact of fracking on the landscape and on his business, posted a good analysis of how the fracking debate is shaping up in Sullivan County -- where elected officials in a couple of towns are seeking to encourage drilling, and five towns have passed bans on the practice:

Why the stark contrast between the 'no' stands in the southwest part of Sullivan and the 'yes' stands in the northwest? The 'no frack' towns, with the exception of Bethel, are largely forested without extensive agriculture or dairy farm operations. The two 'yes' towns have large and struggling farms, mostly dairy operations, and many of those struggling farmers see gas drilling as an economic salvation. There are still two other towns with large dairy farms — Cochecton and Callicoon — also in the northwestern quadrant of Sullivan that have not yet taken a position.

Here's a fact-checking quibble for the New York Times: Treadwell's a hamlet, not a town -- it lies within the Delaware County town of Franklin, which has a narrow strip of New York City watershed land running across its southern border.  And for those who are curious about how the news-sausage gets made: Ramsay Adams, director of the anti-fracking conservation group Catskill Mountainkeeper, noted on Facebook this morning that he helped Navarro find sources for the story.