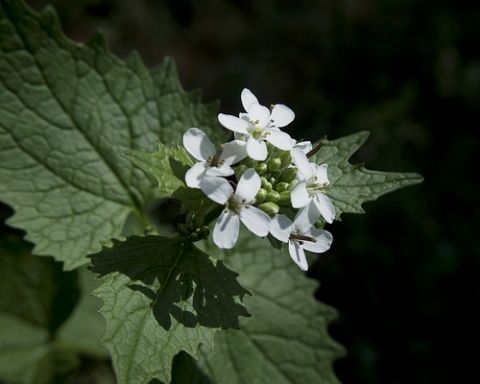 Above: The invasive Eurasian woodland plant Alliaria petiolata, more commonly known as garlic mustard, looking appropriately dramatic. Garlic mustard is most obvious in Northeastern woods around this time of year, when it is in full bloom. Photo by Flickr user Brian Hefele; published under Creative Commons license.

Call it Conservation 2.0: Citizen science is getting more and more digitally connected all the time.

The service launched recently in a handful of states, including New York, but it has national ambitions. In New York State, the iMapInvasives project is being run by the New York Natural Heritage Program (NYNHP), a collaboration between the state Department of Environmental Conservation (DEC) and the nonprofit Nature Conservancy.

On Tuesday, May 8, the iMapInvasives team is seeking volunteers equipped with smartphones to help road-test some new features in the field, and map the spread of invasives in the Esopus Bend Preserve while they're at it.

The event, which organizers have dubbed a "Bio-Blitz," runs from 10am to 3pm. Volunteers will start out at the Saugerties Public Library, get a brief orientation on how to use their smartphone's browser to upload data to the iMapInvasives database, and then head to the Esopus Bend Preserve to try it out in the field.

Though the iMapInvasives project can take data from smartphones, it doesn't have a full-fledged standalone application. NYNHP director D.J. Evans says they may develop an app, if the smartphone trials go well.

"It's browser-based, so you have to have connectivity to use it," she said.

But although iMapInvasives is still in its early stages, being able to use it through a smartphone is a big step, said Evans.

"This is the first time we've taken this phone technology out into the field with us," she said. "This makes the database more available to the citizen scientist."

In the last few years, smartphone apps for plant- and animal-spotters have been flourishing. There's Leafsnap, which uses facial-recognition software to help users identify tree species from a photograph of a leaf. Another good one is Project Noah, which collects citizen photos and accounts of animals and plants spotted in the field.

The iMapInvasives system isn't as user-friendly as these other slick, smartphone-ready apps just yet. But with tens of thousands of data records from a host of participating agencies and nonprofits already in the system, it is powerful, and poised to get better as more states sign on to the project. Currently participating are New York, Florida, Arizona, Oregon, Vermont and Virginia, with New Hampshire, Pennsylvania, and the Canadian province of Saskatchewan slated to go live soon.

Headed to Saugerties tomorrow? RSVP online at this link -- or just show up at the Saugerties Library at 10am.