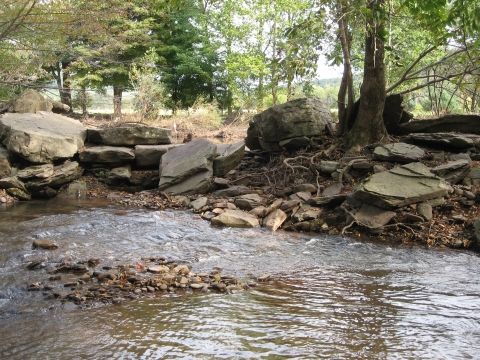 Above: A photo of the Binnekill bulkhead, a topic of discussion at this month's Middletown board meeting. Submitted by Watershed Post reader Thomas Clark.

Highlights of Middletown's regular town board meeting on Tuesday, April 10: Middletown goes online, the town takes a closer look at its energy use and ethics policy, and residents get an update on the ongoing effort to reopen Hog Mountain Road.

The town of Middletown is about to officially enter the digital world, with help from Silvertop Graphics of New Kingston.

The website, which can be found at www.middletowndelawarecountyny.org, is scheduled to go live on Wednesday, April 18.

“I’m very pleased with what Lisa Tait has done for us,” said superintendent Marge Miller.

The website will incorporate a special “sub-site” where emergency information will enable improved communication during a crisis event. Tait, who runs Silvertop Graphics with partner Dan Flanagan, ran a disaster communication site for the town called Middletown Flood Recovery in the aftermath of the Irene and Lee floods.

Delaware County holds an annual hazardous waste collection event known as Clean Sweep, in which local residents can turn in items like pharmaceuticals, electronics, pesticides, and other hazardous waste for free.

Miller, who has been looking for ways to enhance the town’s transfer station services, is seeking to organize a Middletown Clean Sweep event in advance of the county's.

Miller said she has been coordinating with the county and the town fire department, and has identified September 7 and 8 as the town’s proposed Clean Sweep Days, pending a NYS DEC permit and other coordination.

Town takes a closer look at energy use

The board is looking for ways to reduce the annual operating costs of the town hall and highway garage, which run approximately $80,000 per year. Councilman Mike Finberg took particular aim at the automatic lighting in the truck bays at the highway garage, asking highway superintendent John Biruk, “Is it possible to work in the bays without lights in the summer?”

Biruk responded that the lights are off during summer days, and he provided an update on a proposal for a more efficient fluorescent lighting system.

Miller said that the board would put together a program for increased efficiency by June.

After discussing proposed revisions to the town’s ethics policy, the board settled on two key changes.

Councilman Jake Rosa took issue with the clause “No employee should engage in political campaign activities during a work day.”

Finberg agreed, and after discussion town attorney Carey Wagner modified the provision, removing “during a work day” and replacing it with “while engaged in town business.”

The board also agreed, because of the small number of politically active residents in a town the size of Middletown, to remove the requirement that no elected official serve as an elected or appointed officer of a political party.

A section of Hog Mountain Road was closed due to last year’s flood damage, and residents have circulated a petition for the town to restore service. After initial engineering studies found that the road may fail again during high water, Superintendent Biruk contacted Lamont Engineering, who in turn recommended Hayward Baker Engineering.

This firm has recommended boring to bedrock and using I-beams and cables to stabilize the road.

“We’re still doing all we can" to get the road open again, said Miller.

The village of Margaretville requested a support letter for a flood protection project that involves stream work at a bulkhead at the confluence of the Binnekill and the East Branch of the Delaware River in the town of Middletown.

The bulkhead was the subject of an eight-year legal battle between landowner Lauren Davis and the village of Margaretville, which sought to maintain it to keep water flowing in the Binnekill. Last month, a judge ruled in favor of the village, granting Margaretville the right to do maintenance and repair work on the bulkhead.

At the workshop meeting last week, Jake Rosa questioned the specifics of the current project, and Miller agreed to contact the County Soil and Water Conservation District for more information.

At the regular meeting, Miller told the board that the village “got ahead of themselves."

"They’re three to four months away from submitting an application,” she said.

As the application develops, the board will reconsider support. The project will still be included in the town's developing hazard mitigation plan.

(Related: The Watershed Post recently received a letter to the editor from resident Thomas Clark, wondering what the village is planning to do with the Binnekill bulkhead.)

The town has received a six-month extension on a $1 million interest-free loan granted by resident Kingdon Gould to assist the town and its residents in recovery.

Superintendent Biruk reported that 37 project worksheets totaling approximately $200,000 should be completed in May, so the town will be eligible to receive FEMA funding for highway repairs.

The process of getting FEMA reimbursement can be slow, several board members noted, citing a 2005 project on Millbrook Road that has yet to be reimbursed by FEMA.

“Have we seen any money yet?” asked Jake Rosa.

“We have not," Miller replied.

Full disclosure: Reporter Peter Manning is a regional planner, currently working as a consultant for the Central Catskills Chamber of Commerce on an effort to get Route 28 designated as a Scenic Byway.