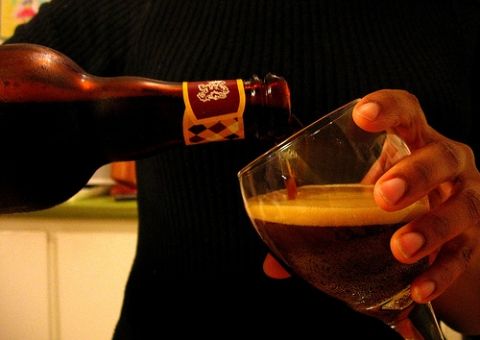 Above: A freshly-poured beer from Brewery Ommegang. Photo by Flickr user Bandita.

In a press release issued yesterday, the governor proposed a package of farm brewery legislation that would give those perks to breweries and wineries making and selling products made with local New York ingredients.

This is a big deal to small businesses throughout the Catskills -- we know of at least 11 Catskills breweries and distillieries ranging from the big (Brewery Ommegang in Cooperstown) to the tiny (Tundra Brewery in Stamford). We list them all on our constantly-evolving "Drink Local" map and tour of Catskills breweries on Foursquare.

The new license would allow craft brewers that use products grown in New York State to operate in a similar fashion to the state's wineries, leading to increased demand for locally grown farm products as well as expanded economic development and tourism.

The Governor also proposed legislation to exempt Farm Wineries and Distilleries from a costly and burdensome tax filing requirement.

The Governor's bill to promote the economic growth of the craft brewery industry will include:

Increasing Tastings: The legislation would allow both Farm Breweries and Farm Wineries to conduct tastings of New York State produced beer and wine at their premises.

In addition, Governor Cuomo today proposed legislation to exempt Farm Wineries and Distilleries from a costly and burdensome tax filing requirement. Currently, all beer, wine, and liquor wholesalers here in New York are required to report sales made to restaurants, bars, and other retailers. However, as Farm wineries and Farm distilleries are small, often family owned operations, they have struggled to afford the costs of complying with this annual reporting. The burden imposed on them by this filing requirement outweighs the benefit received by the State Tax Department, as purchases from farm wineries and farm distilleries account for a very small percentage of the state's total beer and wine sales. These businesses are already required by law to maintain sales records which the Tax Department may obtain upon request, making the additional mandatory filing requirement not necessary.

Dean Norton, President of New York Farm Bureau, said "We've seen tremendous growth opportunities for our farmers from alcoholic beverage license categories that are specifically linked to locally produced farm goods – from the growth of farm wineries to the relatively recent trend of farm distilleries. This is an opportunity for local farmers to bring New York back to being the premier hops growing state that we once were, creating added value markets and new jobs in our State. I'm very pleased that Governor Cuomo has taken this initiative to keep opening new marketing opportunities for our farmer members."

Dennis Rosen, Chairman of the State Liquor Authority, said, "This legislation will provide a significant benefit to local farmers, by helping to create a sustained demand for their products. Ultimately, by providing incentives for farm breweries to expand, these businesses will become, much like farm wineries, destination locations that will promote economic development and tourism within their communities. This bill will boost agriculture and breweries, as well as create jobs and increased economic development across New York. I praise Governor Cuomo for his leadership and look forward to working together to see this bill passed and become law."

Darrel Aubertine, Commissioner of the Department of Agriculture and Markets, said, "This bill will exempt Farm Wineries and Farm Distilleries from burdensome tax filing requirements that have hurt small business here in New York. Our Farm wineries and Farm distilleries are small, often family owned operations, and they have struggled to afford the costs of complying with this annual reporting.

Governor Cuomo has made opening New York State to business a top priority of his administration, and this bill will help cut burdensome costs that have been imposed on small farm wineries and distilleries. New York's craft brewery and farm winery industry is an important part of our economy, supporting jobs and tourism across the state, and I look forward to working together to make sure this legislation becomes law."