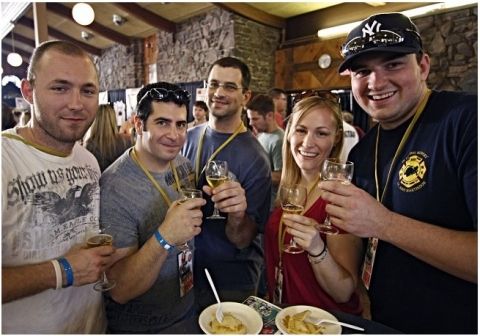 Thirty years ago, American beer mostly came in two varieties: bottle and can. Today, the art of craft beer is alive and flourishing, among professional brewers and passionate homebrewers alike. This weekend, the Catskills celebrates the creativity and craftsmanship of New York State's growing ranks of independent brewers, in an annual festival that has become a rite of spring for the region.

TAP New York is also a showcase for the talents of local chefs. This year's theme is Caribbean food, and several local restaurateurs will be giving cooking demonstrations, including Ric Orlando of New World Home Cooking in Woodstock and Marcus Guiliano of Aroma Thyme Bistro in Ellenville.

If you've been waiting for an excuse to check out Hunter Mountain's new zipline, you're in luck: New York Zipline Adventure Tours will be operating over the weekend. Or for a more sedate aerial adventure, you can take the Skyride chairlift to the summit.

The festival runs from 1pm to 5pm on Saturday, and noon to 4pm on Sunday. Advance tickets, which can be bought at TAP New York or Hunter Mountain's website, are $64 for Saturday, $52 for Sunday, or $20 for a designated driver ticket. You must be 21 or older to get in; no children or pets allowed.