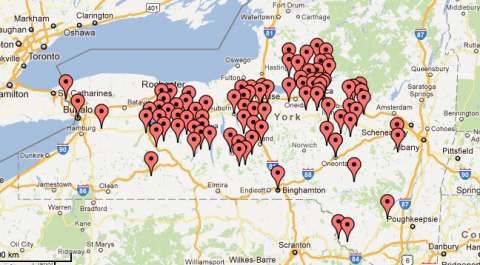 A screenshot from a Gannett interactive map of New York State towns that have passed bans or moratoria on hydraulic fracturing. To use the map and see further detail, click this link.

On Thursday, April 27, Bethel's town board unanimously passed a law banning hydraulic fracturing within town borders, making it the third (and largest) town in Sullivan County to ban the practice.

The River Reporter reports that board member Richard Crumley, whose support for the measure had been uncertain, was persuaded to vote for it:

He did, he said, because, among other reasons, he did not believe the drilling companies would have adequate oversight from state and federal agencies.

The Times Herald-Record reports that not all of Bethel's residents are happy about the decision:

"They're marching themselves into an unnecessary lawsuit," said Al Larson, who heads a landowners' coalition in Bethel that wants to lease some 14,000 acres for drilling.

On the same day as the Bethel vote, Department of Environmental Conservation commissioner Joe Martens made some rather tepid comments to the press, indicating that the agency might consider town laws on hydraulic fracturing when issuing drilling permits. From Gannett reporter Jon Campbell:

"I think logically where there is less resistance and less opposition and there is not a local land-use plan in place, I think those will be easier to permit than in other places," Martens said. "That's not to say that we're going to prohibit them in other places, but it's a consideration we have to carefully view."

Gannett published an interactive map recently that shows the nearly 100 New York State towns and cities that have passed laws to ban or delay hydraulic fracturing. Bethel is not yet on the map, nor are several communities that have passed resolutions opposing hydraulic fracturing -- a measure that has little legal force, but indicates where town officials stand on the issue. Several Ulster County towns, including Olive and Saugerties, have passed resolutions opposing gas drilling.