ADK Council: The only good bobcat is a live bobcat 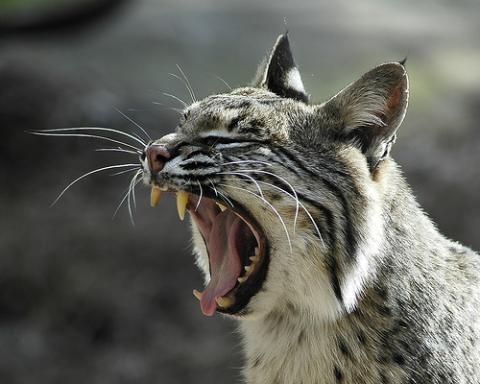 A few weeks ago, we wrote about the DEC's recent proposal to introduce bobcat hunting into new parts of New York State, and extend trapping season in some areas. The story drew plenty of fire from readers who would rather see bobcats roaming New York State forests than stuffed on mantels.

They're not alone: The Adirondack Council, a nonprofit group that works to keep the Adirondacks wild, has come out swinging against the DEC's bobcat plans to extend trapping in the Adirondacks.

The group's conservation director, Allison Buckley, wrote in a letter to the agency yesterday that bobcats are worth more to the state as deer predators than as hunting trophies:

The 2012-2016 Management Plan for White-tailed Deer in New York State describes the high impact over-browsing of deer have on forest ecosystems, the high number of automobile collisions involving deer, and an estimate of $59 million in crop damage every year. As deer hunting decreases due to lack of interest, allowing bobcats to assist in controlling the state’s deer populations would be beneficial to the Bureau of Wildlife’s mission.

And executive director Brian Houseal feels that bobcats are a major tourist draw to the region:

“Bobcats are also important to Adirondack tourism,” Houseal said. “Wildlife viewing is one of the most popular habits of visitors to the park. Bobcats are stealthy and reclusive, so sightings are one of the most prized and sought-after experiences for visitors, especially for photographers. It would be a grave mistake to allow them to be wiped out by doubling the length of the trapping season.”

The Albany Times-Union has a story about the issue in today's paper.

Below: A press release from the Adirondack Council, opposing the DEC's new bobcat plan. The public comment period on the plan ended yesterday.