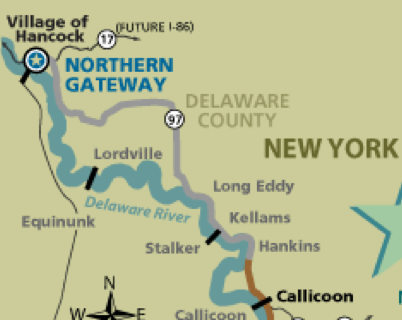 The Upper Delaware Scenic Byway, from the UDSB website.

A proposal by the Board of Directors of the Upper Delaware Scenic Byway (UDSB) to ban "non-traditional" industrial traffic along the byway is ruffling feathers in the town and village of Hancock in Delaware County, where local officials view the proposal as an attempt to discourage hydraulic fracturing.

On August 22, the UDSB approved a resolution urging a ban on all “non-traditional” heavy industrial traffic along Route 97. Route 97 runs through a portion of southern Delaware County, which includes the town and village of Hancock. Exemptions were suggested in the recommendation for “agricultural” traffic to include the industries of lumber, bluestone mining and canoe transport.

The text of the resolution calls for a ban to “all non-traditional forms of heavy industrial and mining uses ... that will detract from the inherent scenic qualities that were the basis for the Upper Delaware Scenic Byway’s designation.”

The UDSB has now asked local, state and federal agencies with jurisdiction over Route 97 to support the recommended ban of “all large trucks and vehicles involved in new forms of heavy industrial use and mining” from the road’s entire 70 miles along the Delaware River.

Is the resolution prompted in an effort to discourage gas drilling development in the region? UDSC Spokesperson Glenn Pontier says no.

“This is not taking a stand on fracking or gas drilling," he said. "We’re an advisory board. We can say whatever we want ... but we have no power.”

Hancock officials are outspoken against the resolution and proposed ban, criticizing it as a thinly-veiled attempt to ban gas drilling.

"[It is a] shortsighted and poorly-written document aimed directly at the natural gas industry," said Fred Peckham, the town of Hancock representative to the Upper Delaware Scenic Council, an organization committed to carrying out a River Management Plan for the Upper Delaware region in cooperation with the National Park Service.

The resolution passed "with little thought as to the safety and economic effects it would have to the people and towns whose path lies within its boundaries," Peckham said.

Peckham also feels that the resolution places restrictions not only on the state highway, but on landowners’ rights to develop their resources along this state highway. He points to what he feels is an obvious oversight in the resolution: that it will force traffic to use county and town roads to avoid the banned highway.

“The resolution creates a situation where companies would be forced to use county and town roads to avoid the UDSB," he said. "This would create far more safety problems then it cures for those who use these narrow and winding local roads.”

UDSB spokesman Glenn Pontier responded to Peckham’s objection by stating that industrial traffic can be re-routed to the railroad, which he deems a “creative alternative with a lot of promise.”

On Tuesday, September 6, the town of Hancock Board responded to the UDSB’s initiative with a resolution of its own. Town officials stated that the UDSB recommendation is “very vague” and "a backdoor attempt by a taxpayer-funded organization to ban natural gas development on private property within the whole corridor.”

The town of Hancock is not a member of the UDSB. The town did not support the development of the scenic byway designation of Rte. 97 because, according to Town Supervisor Samuel Rowe, Jr., “It would have created too much red tape.”

The Village of Hancock is a supporting member of the UDSB and is represented by Cliff Johnston, who voted in favor of the resolution.

Mayor Martin made it clear at Monday’s board meeting that the vote was that of the representative individually and not in any way reflective of the view of the governing body of the Village.

“It was not approved by the village board,” Martin said.

Hancock village Trustee Patrick O’Brien was outspoken in his opposition to the UDSB resolution.

“You cannot ban one industry from using the road," O'Brien said. "Everyone should be allowed to use the road. If I was a logger or a stone cutter I would wonder what’s going to happen to me next. They are looking for any way they can to shut it [natural gas drilling development] down.”

Martin then pointed out that using the railroad to transport mining materials would post a contamination risk to the Delaware River.

The railroad is closer to the Delaware River than State Route 97, he said, and if there was a spill or accident, chances of contamination would be greater by proximity alone.

The UDSB had urged the village of Hancok to support the anti-industrial-use recommendation, but at Monday's meeting, the village board took no action to do so.

Efforts to establish scenic byways in other parts of the Catskills are underway, along Route 28 in Delaware and Ulster counties and along Route 30 in Delaware and Schoharie counties. Because Delaware County's Board of Supervisors supports the development of natural gas drilling, similar conflicts about the "industrial" use of these roadways may arise.

Caroline Martin, the organizer of the initiative to create a Route 30 Scenic Byway, opposes the UDSB's resolution.

“Speaking for the Route 30 group, we would like to say that we are emphasizing the history of our route," she said. "The history is all about logging, mining, farming, and the transportation by road, river, and rail of the products of these industries. We hope to make the East Branch corridor a celebration of our historic local industries. Truck restrictions would be detrimental to this purpose.”

Martin further stated that each byway is unique and that its features and purpose can differ vastly. She stressed that the plans for Route 30 “do not seem to be the same as those for Route 97.”