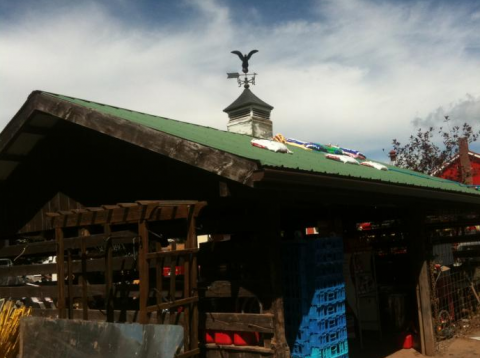 Above, a photo of the shed at the Prattsville Agway where the Young family was trapped during the flood, from the Young's General website.

Brian Young, the energetic owner of two Greene County and feed stores, was trapped with his family on the roof of a shed near their Prattsville Agway store during Hurricane Irene.

Young, who also owns a hardware store in Catskill (quixotically located just across the street from a Wal-Mart), is an irrepressible personality. He so impressed a Wall Street Journal reporter covering the flood in Prattsville that the newspaper wrote a whole article about him on August 31. Here's an excerpt:

But Mr. Young, 32 years old, is happy to be alive after weathering Tropical Storm Irene on the green metal roof of a storage shack, shivering as water from the Schoharie Creek flowed around his home.

And he's excited about the opportunity to rebuild his store.

"In a year, it's going to be an American success story," Mr. Young said inside the remnant of his store Tuesday. "We'll do what we did in the Catskills to begin with; we'll start from nothing and we'll go against the odds. I'm excited about it, frankly."

True to form, Young is attacking the project of re-building his family's store head-on. He has posted his own account of the flood in Prattsville on the Young's General/Prattsville Agway website, and has a detailed list of how to help. Here it is reprinted in full:

"Morale After the Flood"

On Sunday, August 28th my family's third-generation hardware & feed business was ravaged by hurricane Irene. In one swift swoop, our homes (both my parents and my own are at least 50-70% gone), cars, belongings, and business were taken from us. The fact that I'm even here to write this letter is a miracle.

For 3 or 4 hours (I honestly can't remember which), I clung to our shed roof with my parents, brother, and 3 dogs as we watched everything crumble and float away. My brother and I were lucky enough to pull my parents out of a window in our storage barn, then get them to our store. It was only then, when we thought we were safe, that our 100-year old building (that my Grandpa bought in 1957) started to creak and give-way. We then swam/waded (the water was about 4.5-5ft deep) to a shed in our store parking lot. After clinging for 3-hours to bags of potting soil that we had thrown up there for the dogs to hold on to, we swam back into the store and stayed there until we could make it to dry land late that Sunday night.

While I was up on the roof, I looked at my parents clinging to each other with that look of death in their eyes (if you've ever seen the scene in Titanic where the older couple are holding onto each other watching the water lap around their feet, then you know what I'm talking about). I whispered to my brother one word "morale." We needed to stay positive while the wind and rain was making us shiver so hard that we were in jeopardy of sliding off the roof into the current.

The same applies today and the next 2-4 weeks. We need to rebuild, so that our tiny community can rebuild around us. As a little town of 500, I understand that we are the smallest (and probably the last) to get any financial help from the government. The future looks especially bleak right now, but so did it when we were trapped on our shed roof. The key still remains the same, "Morale."

As Young Retailer of the Year in 2009 and owner of our newly-opened store in Catskill, NY (which is literally 30-ft from Wal-Mart & Lowe's), I know what it's like to battle insurmountable odds. But, I can't do it on my own. With no flood insurance and no help from the government, I am appealing to you to help us again be the foundation of the Northern Catskills. I want people and other businesses to be able to look at us in 1-year and be inspired say..."Wow! It can still be done! Small business, USA is still alive and kicking."

What we need from our Vendor Partners is product. For those companies willing to do so, we are looking for new inventory to replace what floated away. Those willing to donate product will obviously be given the highest traffic locations in each designated category. Please contact me with any questions you may have regarding the linear footage per category as well as a product break-down for each category.

I look forward to the exciting developments and character-building challenges that I know will be taking place in the next few months.

Thank you again for joining with my family and I as we embark on this exciting journey!