Mama bears: Not so fierce after all 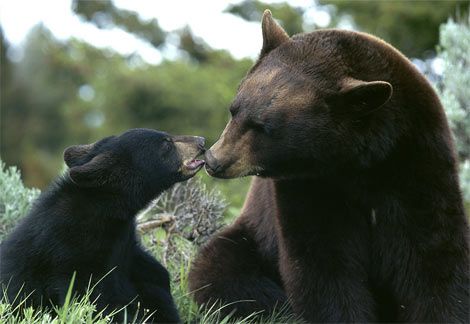 The roar of a mother black bear protecting her cub might strike terror into the heart of any hiker, but it's usually a bluff, says Stephen Herrero, a biologist at the University of Calgary and the author of an enlightening new study on aggression in black bears.

The bear to worry about, Herrero says in the New York Times today, is the one you don't see:

“Mother bears, whenever they feel threatened or a person is too close, they act very aggressively,” said Stephen Herrero, the study’s lead author. “They make noise, they swat the ground with their paws and they run at people. They want to make you think that they’ll eat you alive, but they almost always stop.”

By contrast, “the kind of bear you need to be afraid of is not feeling threatened by you — it’s testing you out as a possible prey item,” said Dr. Herrero, a professor emeritus at the University of Calgary. “It’s quiet. It stalks you just like a lion might stalk you.”

The study, which was published today in the Journal of Wildlife Management, takes an in-depth look at the 63 fatal attacks by black bears that have happened in North America since 1900, and comes up with some surprising conclusions. Herrero found that 92 percent of fatal bear attacks were carried out by male bears, and 88 percent of these attacks involved a bear acting like a predator, not defending young.

Herrero, who's been studying bears for decades, is a well-known figure in the bear world. His 1985 book, Bear Attacks: Their Causes And Avoidance, is a classic on the subject. In it, he claims mama bears get a bad rap:

Al Erickson, who made the pioneer study of black bears in North America, captured 96 bears 109 times in the late 1950's and early 1960's.  He stated that most female bears did not display strong maternal protective instinct and quickly abandoned cubs when danger was imminent. In only 3 of 10 cases were females detected in the vicinity of cubs he trapped.  Two of those mothers attempted to drive off the handling crew by rushing forward, snorting, and rapidly chomping their teeth.  At no time did they approach closer than 10 feet.  A particularly aggressive charge could be terminated by loud shouting, which seemed to unnerve the animal.

New report: Almost half of households in NYS (and Catskills) struggle to pay the bills

Cicadas on the march