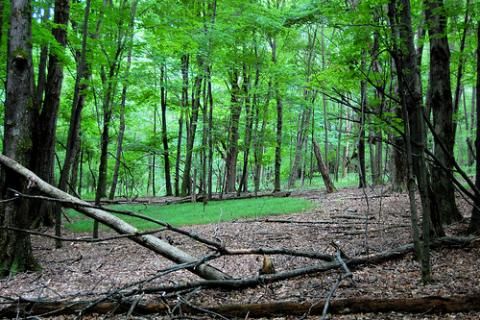 We're delighted to bring you the Field Notes column by Andes resident Jack McShane, who writes regularly about the green hills and hollows of the Catskills for the Andes Gazette. This month, Jack turns his keen eye to local game, why horses and possums don't mix, and that most controversial of cats, the Eastern mountain lion. --Ed.

It has been my observation lately that deer and turkey numbers here in Bussey Hollow are drastically down as compared to previous years. Having said this I am also getting reports from my buddies in the Tremperskill Hunting and Fishing Club that they are seeing normal numbers in their hollows and hills.

As I write this, my fields have not yet been hayed, so much is hidden from view, and I have high hopes of seeing more when they are. As of now I have been watching three mature does that appear not to have fawns, although one fawn has been caught on my trail cam, also two hen turkeys with no poults. I believe the extremely wet spring has been the major factor causing the dearth of turkey poults. When the young poults get wet prior to feathering out they are very susceptible to pneumonia and often die as a result. On the other hand, I did see two broods of our other ground-nesting game bird, the ruffed grouse.

We have not seen a cottontail rabbit since two were killed in early spring, and yet there have been the usual numerous roadkills on our toll roads. We have a small population of woodchucks; two or three are residing in the relative safety of Nancy’s gardens. The deer population, which was already down because of three winters with high snow conditions, is being hammered by their natural predators, the coyotes and bears. Recognizing this, the DEC has lowered the number of antlerless permits in our local (4P) wildlife management unit to 1700 this year from 2700 issued in 2010.

Our bear population is on the run, not only locally but throughout the southern tier of the state, with multiple sightings by me both on and off the trail cam. This has also been noticed by DEC which has just opened a hunting season on bears in 14 additional wildlife management units east of the Hudson. The region 3 biologist states that “the growth in the bear population is probably going to continue even with the increased hunting opportunities.” As of now the deer herd has, as I see it, five controlling factors; cars, hunters, coyotes, bears and severe winters. And there are rarer predators around as well; a friend reported seeing a large fisher actually attack a fawn but fail to take it down.

This year, all wildlife have in their favor a tremendous apple crop -- though, on the downside, none, or very few, acorns and beechnuts. This, of course, can vary from region to region if not hollow to hollow and hill to hill. I am again hoping for a light winter.

Horse owners take note, as I have just been made aware by my friend Suze Skovsende, a true horse lover who works in the lab at Margaretville Hospital, that opossums and horses are a bad mix. According to a horse.com bulletin, Equine Protozoal Myeloencephalitis (EPM), a very common neurological disease in horses, is caused by the inadvertent ingestion of opossum feces. Apparently a protozoon only found in the feces of opossums is the sole cause of the disease. The bulletin states that “there is no justification to relocating opossums to heaven; however, rehoming them away from horses will likely reduce horses’ risk of contracting EPM.” In Andes we have many horses and opossums, and as I have no horses, all these furtive marsupials are more than welcome to be ‘rehomed’ here.

Many friends are anxiously waiting to hear my comments about Mountain Lions now that one has been killed in eastern Connecticut. If you have not already been made aware of this, here is the story as repeated in many papers and environmental blogs. “The lean, 140-pound male was killed on June 11 when hit by a vehicle and it was initially believed to be an escaped captive, but tests showed that it was not neutered or declawed common in domestic animals. The cat whose origins were in South Dakota was tracked by DNA from its hair and droppings as it passed through Minnesota and Wisconsin in 2009 and 2010.” This poor beast traveled somewhere between 1500 and 2000 miles probably searching for a mate, the longest ever recorded for any land mammal, only to be killed on a toll road, the sad termination of his lonely journey. Surely if there are others that have wandered into our Adirondack and Catskill forests -- and there may be -- my hope is that they will prosper and one day wind up on my trail cam and never on a toll road.

“Every blade in the field, every leaf in the forest, lays down its life in its season, as beautifully as it was taken up.” - Henry David Thoreau