A guide to the DEC's latest gas drilling plan 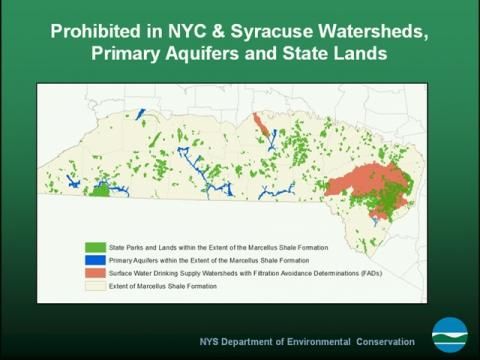 It's officially a draft of a draft. But a 736-page document from the New York State Department of Environmental Conservation, released to the media on Friday, brings New York State one step closer to allowing natural-gas horizontal drilling with hydraulic fracturing.

June 1 was the deadline for a long-anticipated Supplemental Generic Environmental Impact Statement (SGEIS) from the DEC on hydraulic fracturing. (This is the DEC's second crack at regulating hydraulic fracturing -- an earlier version of the SGEIS was issued back in 2009, and was bombarded with public criticism.)

Over a month after the deadline, the final details of the 2011 version of the draft SGEIS are still being hammered out. But the DEC did release an executive summary and a draft of the report to the media on Friday, July 1 – a day after the New York Times set the internet abuzz with a “Breaking News” alert that the state was lifting its moratorium on hydraulic fracturing.

When complete, the 2011 version of the SGEIS will be 150 pages longer and contain "more vigorous mitigation measures" than the 2009 version, according to DEC Commissioner Joe Martens, who gave a press conference on the document on Friday.

The 2011 draft statement will go live on the DEC's website this coming Friday. And that version, too, will be unfinished -- independent consultants are still working on "socioeconomic and community impacts analyses," which will be finished in August and added to the report. Only then will the new SGEIS be considered finished, and opened up for a 60-day public comment period.

In practical terms, this means that drilling will not start until at least the end of September. Martens estimated even longer -- "it will be six months or so before we get to that point," he said on Friday.

We've re-posted the early media-release version of the 2011 draft SGEIS at the bottom of this post. And, better yet, we've read most of it. (Hey, what are long weekends for?) Here's our breakdown of what the DEC is doing, with key points listed in bold. (To help you find your way in the report, we've cited all quotes with both the report page numbers and the page numbers of the Scribd document itself.)

Under the current course of action, hydraulic fracturing will be permitted in New York State.

Anti-drilling activists across the state had hoped that the DEC would prohibit horizontal drilling with hydraulic fracturing entirely. In its executive summary, on page ES-24 (page 26 in the Scribd document), the draft SGEIS says that the DEC considered outright prohibition, but concluded the benefits of fracking are worth the risks, which the DEC thinks it can mitigate:

There's a detailed argument for allowing fracking way down in Chapter 9 (Scribd page 712) of the draft report, where the DEC writes that not harvesting natural gas from the Marceullus Shale would be "contrary to New York State and national interests," and goes to to cite Article 23-0301 of the Environmental Conservation Law, the Draft 2009 New York State Energy Plan, and the New York State Commission on Asset Maximization in support of that view.

The DEC wants to ban drilling near drinking water sources.

It's clear that the DEC is uninterested in a drilling ban. But the DEC is very interested in mitigating the potential hazards of drilling, and it's introduced a suite of new restrictions on where and how fracking can happen. Here are the big no-no's:

There are many new mitigation regulations.

The 2011 draft SGEIS is bristling with rules and requirements designed to mitigate hydraulic fracturing's impact on the environment, from its release of greenhouse gases and radiation to its contribution to stream turbidity and wildlife habitat fragmentation. Since most of the 700 pages of the document are devoted to this kind of rule-making, we aren't able to list them all. Here are a few that stood out to us:

Local land use laws and comprehensive plans matter -- but how much?

There's a surprising new nod to home rule in the DEC's report that gives towns and municipalities a say in whether or not fracking will happen in their backyards. The report includes a requirement that any company seeking a permit to drill must show that their drilling activity does not conflict with local land use laws and local comprehensive plans. A conflict between a drilling company's proposal and a town's local laws will trigger another environmental review by the DEC. (Page 8-5, Scribd page 650.)

This is especially interesting in light of the fact that towns are beginning to address horizontal gas drilling and its associated industrial activity in zoning and comprehensive plans, and several towns have recently voted to ban it entirely.

However, it is not clear that the DEC intends to yield to local zoning if there is a conflict. It appears from the wording of the document that the agency has leeway to permit drilling in municipalities that seek to ban it.

What are other media outlets saying? A lot. Here's a roundup of reponses to the DEC's recommendations:

The New York Times beat most outlets to the punch last Thursday with an early story about the Cuomo administration's plans to proceed with allowing hydraulic fracturing in the state.

The Times's story erroneously stated that the DEC's earlier draft regulations had included a ban on drilling in the NYC and Syracuse watersheds. And a breaking-news headline that appeared on the website at noon on Thursday -- "NY State To Lift Moratorium On Hydraulic Fracturing" -- gave the impression that the drilling could start any moment, but the actual story, when it was posted later in the afternoon, was a bit less dramatic.

DEC commissioner Joe Martens blasted the New York Times's coverage in a letter to the editor. An excerpt:

As I am sure you are aware, this is a very important issue for New York. To get the story so blatantly wrong by posting a misleading headline on the Times' homepage is a disservice to your readers and to those who care about this issue.

The Huffington Post's Tom Zeller -- who, until just a few months ago, was an environmental beat reporter for the New York Times -- wrote a clearer and more thorough story than the Times's on Thursday afternoon.

The Binghamton Press & Sun-Bulletin, a Gannett paper whose reporter Jon Campbell has been covering the gas beat for years, has several good articles. Here's a summary of the DEC's recommendations, and here's one on a new 12-person "High-Volume Hydraulic Fracturing Advisory Panel" that will guide the agency as it finalizes its drilling regulations over the coming months. The panel includes several high-profile environmental advocates.

Speaking of: Natural Resources Defense Council lawyer Kate Sinding, who will serve on the DEC's advisory panel, had a blog post on Thursday (after the New York Times's story was published) stressing that the de facto moratorium on drilling in New York State is likely to last for months, and expressing some cautious optimism:

Obviously, before the protectiveness of these and other provisions can be fully evaluated, we will need time to carefully review the revised draft document itself.  But these appear to represent real improvements over the initial draft released in September 2009.

Mark Ruffalo, a prominent movie-star anti-fracking activist, is coming out swinging against the SGEIS -- particularly its special bans on fracking within the NYC and Syracuse watersheds:

The DEC apparently thinks only residents of New York City and Syracuse deserve protection, and it's acceptable for everyone else to become collateral damage. There are thousands of watersheds in New York State. All of them are at risk, and all of them deserve protecting. The DEC appears to be playing divide and conquer along upstate/downstate lines, that old divide that has hurt the state so much.

Local pro-drilling interests aren't happy with the ban on drilling in the watershed, either. There is already talk about lawsuits from local landowners whose lands have been taken off the table by the ban. Here's the Daily Star quoting James Eisel, chairman of the mostly pro-drilling Delaware County Board of Supervisors, on the issue:

"I think it's crazy to have a ban in the New York City watershed, but if that's what they're going to do, the city should compensate the landowners in the watershed."

Science writer Sue Heavenrich keeps a very good blog about gas drilling in upstate New York at The Marcellus Effect. On Friday, she posted a summary of Martens's recent public comments on the new draft, which she dubbed "SGEIS 2.0."

The release of the DEC's latest draft has anti-drilling activists redoubling their efforts to pass a statewide ban. A petition to ban horizontal drilling with hydraulic fracturing is circulating, and Catskill Mountainkeeper is urging its members to email elected officials.