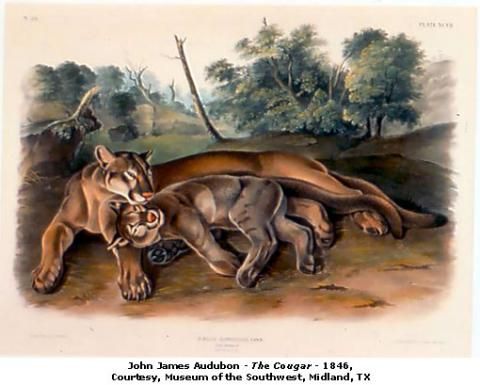 After several years of weighing the evidence, the U.S. Fish and Wildlife Service has finally called a halt to its investigation of the eastern cougar -- previously listed as "critically endangered" on the Endangered Species List -- and declared it extinct.

The eastern cougar, which once ranged across eastern North America, is (or was) considered by many scientists to be a subspecies -- a population that is distinct from other subspecies of cougars, but not genetically different enough from other cougars to be considered a species in its own right. But taxonomy is a tricky thing. Even aside from the matter of whether the eastern cougar survives in the wild -- a topic that has been controversial for decades -- biologists still disagree as to whether it should be lumped into the same group as its western cousin. From a 2003 National Geographic story about increasing evidence for cougars in the east:

Many cougar biologists now think that the cats in North America species are so closely related they should be considered a single subspecies. For now, the splits within the cougar species stand, and it's unclear how changing species designations would affect cougar protection.

One thing that is clear is the cougar's comeback. In the West, mountain lion populations have started to boom, with states like Montana, Wyoming, and Colorado declaring the cats completely recovered. The slow reappearance of the animals in the East could be the movements of these large ranging cats.

After a formal process, which includes soliciting comments from the public, the FWS will seek to remove the eastern cougar from the Endangered Species List.

While the FWS has apparently closed the book on the survival of wild eastern cougars, we doubt today's announcement will satisfy folks who have been insisting for decades that there are mountain lions in the hills of New York State. If you've lived in the Catskills for any length of time, odds are you know somebody with a cougar story, and a lot of them aren't easy to explain away as bobcat sightings or figments of overactive imaginations. Could there be escaped pets roaming the Adirondacks and Catskills? Could western cougars have roamed all the way across the Midwest to end up in New York State? With these secretive cats, it seems any scenario is possible.

A good web resource on cougar sightings is The Cougar Network, a site that keeps an updated map of confirmed sightings since 1990. Their map of sightings in the Northeast includes a 1993 sighting from Keene Valley, in the Adirondacks of New York. Here's the memo in which DEC biologist Ed Reed describes a deer kill that all evidence suggests was the work of a mountain lion.

If you're curious, check out the FWS's full report below. We noticed that the section on New York State doesn't include Ed Reed's 1993 sighting -- and the federal agency made at least one error, referring to the "State Department of Environmental Protection." (New York State's environmental agency is the Department of Environmental Conservation; the DEP is the New York City agency that polices environmental regulations in the New York City watershed. It's an easy error to make, and we've made it before when in a hurry. But still.)