Day of Action Against Fracking draws scores to the Pepacton Reservoir 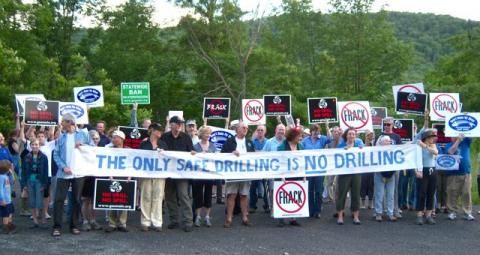 On Saturday, scores of people gathered on the Shavertown Bridge that crosses the Pepacton Reservoir in Delaware County to protest the controversial practice of hydraulic fracturing, or fracking. [For video coverage of the event, click here. -- Ed.]

The protest was part of a statewide Day of Action Against Fracking, during which anti-drilling groups demonstrated across the country.  According to the Chenango Delaware Otsego Gas Drilling Opposition Group, which organized the Delaware County protest, 110 people came out to protest on the Pepacton. The Catskill Mountain News, which attended the event and ran a photo in this week's newspaper, pegged the attendance at around 50.

CDOG's organizers are pleased with how the event turned out. Over email, we invited three of them -- Joan Tubridy, Carl Arnold and Laurie Buckmaster -- to tell us how it went:

Q: Was this the first time anyone has ever demonstrated on the Shavertown bridge?

A: As far as we know; certainly about fracking.

Q: What was the mood of the crowd in light of last week's legislative session, which seemed to leave the issue of fracking in the dust?

A: Resilient, determined, jubilant, defiant. We know this is a long haul fight.

Q: What's next for CDOG?

A: Probably an Albany rally in late August in which we invite all groups across the state who've been collecting ban petition signatures to submit their petitions in unison to the governor.

Q: The Catskill Mountain News recently wrote that Chesapeake Appalachia has purchased several gas leases that are located inside the NYC watershed. Do you think there's a chance that fracking might occur on watershed lands?

A: Yes, the watershed is not safe from industrial gas extraction. Technically, wells situated in the watershed simply have a case-by-case permitting requirement rather than the one-size-fits-all generic permitting regime that pertains in most of the rest of the state. But we think it's likely that even in the supposed "case-by-case" permitting, one permit will be used as a template for another with little if any genuine consideration of individual site issues.

7/1/11 update: This post has been changed. In an earlier version, I mistaken wrote that Chesapeake Energy has purchased gas leases within the watershed. The company is actually Chesapeake Appalachia. I've also added a link to Jessica Vecchione's video coverage of the protest, which was released today. -- Julia Reischel

7/2/11 update: I've embedded video coverage by Jessica Vecchione and have added new photos of the protest taken by Izzy Levey-Swain. See them below. -- Julia Reischel