Checking in on the bat survivors 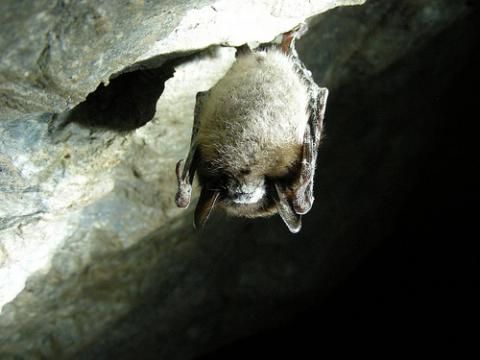 Above: A little brown bat with white-nose syndrome symptoms. Via the Flickr page of the U.S. Fish and Wildlife Service Northeast Region.

Phil Brown of the Adirondack Almanack posted a story yesterday about his visit to New York state's largest bat hibernaculum, which is located in a former graphite mine in Hague, NY.

He was tagging along with scientists from the Department of Environmental Conservation, who were there to see how much havoc the dreaded white-nose syndrome has wreaked with New York's bat populations this year.

Last year, Brown writes, the bat population in the cave had fallen to only a few thousand, down from 185,000 a decade ago. This year, it looks like the decline has gotten even worse:

Before white-nose struck, the ceilings used to be covered with bats. That’s far from true these days. As we walked through the mine, we scanned the roof with our headlamps to find a specimen here and there, or sometimes a cluster of two or three bats.

After leaving one chamber, biologist Scott Crocoll, remarked, “We’re lucky if there were fifty to sixty bats in there, and there used to be thousands.”

In the old days, little browns accounted for about 98 percent of the bats in the mine. At their peak, the mine probably contained around 200,000 little browns. Last year, DEC counted only 2,049. From what he saw yesterday, [wildlife scientist Carl] Herzog believes the little browns are continuing to decline.

“We definitely saw fewer of them than we did than last year in the same spots,” Herzog said.

There is a tiny silver lining to this dark cloud, however. While the little brown bat is in dire straights, another species -- the small-footed bat -- seems to be holding its own against the mysterious scourge. And Brown reports that the endangered Indiana bat, which was completely absent last year, was represented by one individual this year:

“It’s hard to get excited about one,” Herzog said, “but it’s better than nothing.”