Pro- and anti-drillers rally in Albany 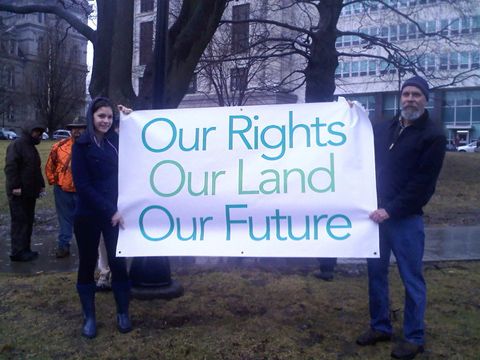 Lest anyone doubt the passion and commitment of the protestors at today's dueling rallies on the issue of natural-gas drilling in New York State, let the record state: It was January, and it was raining, and it was in Albany. Enough said.

A representative of Damascus Citizens for Sustainability was on hand with a Blackberry posting live updates to Twitter. Crowd estimation at a protest is always a slippery beast, but it sounds like a good number turned out:

@stopgasdrilling Security guard stated "wow I haven't seen this many people in a while!"

Pro-gas-drilling landowners were there as well with the Independent Gas Association of New York:

The Times-Union's Casey Seiler, who moderated a panel discussion of the science and risks of drilling on WAMC radio earlier today, has a nice account of the rally, which apparently had some logistical issues due to the weather.

Update: The bloggers at Un-Natural Gas have many more great pictures from the rally: here and here.