A bassline runs through it 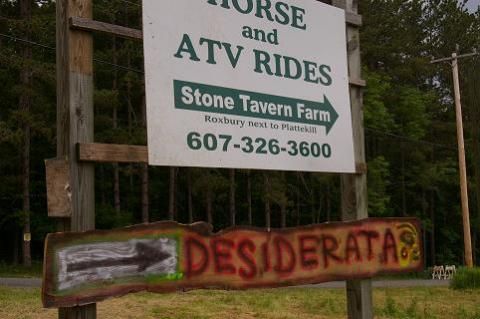 If it rains this weekend, the town of Roxbury could have another Woodstock on its hands.

“That's the joke,” said John Burrows, the owner of Stone Tavern Farm, which is hosting the Desiderata festival, an annual celebration of arts and electronic music, on its 400 acres from Wednesday to Sunday this week.

Burrows is expecting Desiderata, described on its website as “an outdoor art, music, film and yoga festival,” to draw about 2,000 people to the farm for five days of camping, revelry and nonstop oontz-oontz.

It’s by far the largest event that Stone Tavern Farm has ever hosted, and news of its coming took Roxbury by surprise, said Allen Hinkley, the chief of the Roxbury Volunteer Fire Department who is also a town councilman. “From what I understand happened, they changed venues at the last minute. We didn't really find out about it until [last] weekend.”

Burrows said while the festival will be larger than the farm’s usual events, its out-of-town organizers are experienced at handling details from food and water to security and safety.

“We've had 600 and 700 people many, many times,” he said. “Not 2,000. It's definitely going to be a little bit bigger than what we're used to. But the crowds are going to be spread out. They’re trucking in water, they’re disposing of everything themselves – they have quite a neat little city.’

Last summer, the Desiderata festival sparked angry tirades about noise from neighbors in the Herkimer County town of Warren, where the festival was held on the grounds of the Gelston Castle Estate in the Mohawk Valley.

Those noise complaints were the reason for the festival’s move to Delaware County this year, Burrows said.

“That's why they’re up here,” Burrows said. “Down there, they had a whole neighborhood surrounding the place, so of course there were noise complaints. We're secluded here. Very few people live in the valley, and they’re all friends of mine. They’re excited about it.”

There are no permits required in Roxbury for hosting events attracting thousands of people, Hinkley said. (New York state’s sanitary code requires permits for events with more than 5,000 people.) He added that there are also no noise ordinances, although, depending on how this weekend goes, that may change.

“I think the biggest complaint about the festival in past years was noise,” he said. “This may prompt us to develop some ordinances later to deal with that problem. And if turns into a bigger event than everybody thinks, I'm sure we'll be rethinking whether they can do it again.”

On Thursday afternoon, the pulse of a bass line could be heard faintly above the rustling of the leaves on Meeker Hollow Road. Tonight and tomorrow are the main attractions – so, Roxbury residents, if you hear your windows rattling, it might not be an earthquake this time.