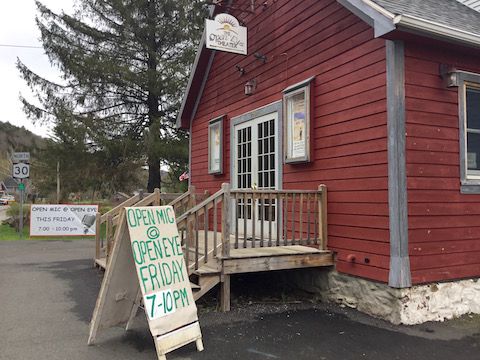 Above: The Open Eye Theater in Margaretville hosts a monthly open mic night on every first Friday of the month. Tonight, Friday, July 8, the venue hosts its July open mic night starting at 7 p.m. The event was pushed back a week due to the Fourth of July holiday. Photo by Rebecca Andre.

Across the Catskills, open mic nights offer audiences a chance to see veteran and amateur musicians, poets, storytellers and comics, usually for free.

The level of talent of the performers varies, as does the age and choice of instrument, but that unpredictability is part of the fun. Guitars, keyboards, banjos, fiddles, egg-shakers and plan old spoken word: You can hear it all in one impromptu variety show.

For four years, musician Ben Rounds has hosted an open mic night at every Tuesday at the Emerson Resort and Spa in Mount Tremper.

“I am proud of the fact that this weekly open mic gives performers a place to try out new material, play at least one show a week, or expand their fan base,” Rounds said.

Melissa Zeligman, a local chef, poet, and filmmaker, is a regular.

“One of the things I like most about is that it’s on Tuesday evening,” she said. “It’s great for those of us in the hospitality business.”

Guitar player Eric Squindo of the band Mister Roper has attended open mics for years. He sees then as an opportunity to try out the latest song he’s written, before taking it on stage or to the studio.

Above: Steve Sulko plays at an open mic night at the Emerson Resort & Spa in Mount Tremper. Photo by Rebecca Andre.

So does Steve Sulko, a musician who just recently began writing his own material.

“I enjoy playing with and for colleagues that constructively critique your performance and help you to grow,” he said.

Find an open mic near you

Tonight, you can catch an open mic night at the Open Eye Theater in Margaretville—the normal first Friday open mic has been pushed back a week due to the Fourth of July holiday to Friday, July 8.

Other open mics in Delaware and Ulster counties: