Above: A poem written on a paper airplane, a prototype for "Skywriting: Poems & Planes," a workshop to be held Saturday, May 28 at the Poetry Barn in West Hurley. Photo by Lissa Kiernan.

On Saturday, May 28, from noon to 5 p.m., she’ll bring that skill to her new venue, the Poetry Barn in West Hurley, with inaugural course “Skywriting: Poems & Planes,” the first of several “Last Saturdays at the Barn” events. And the poems will, in fact, fly.

To explain how the work will defy gravity, Kiernan, a recent émigré from Brooklyn, met Watershed Post for coffee at Bread Alone in Boiceville, and gave a brief history of the building.

“The Poetry Barn is the former home of the Harry Everett Smith Memorial Library,” she said. “He was a Beat, a friend of Allen Ginsberg, an avant-garde artist, filmmaker, musicologist and collector. And, he possessed the largest known paper airplane collection, which he donated to the Smithsonian Institution's National Air and Space Museum.” 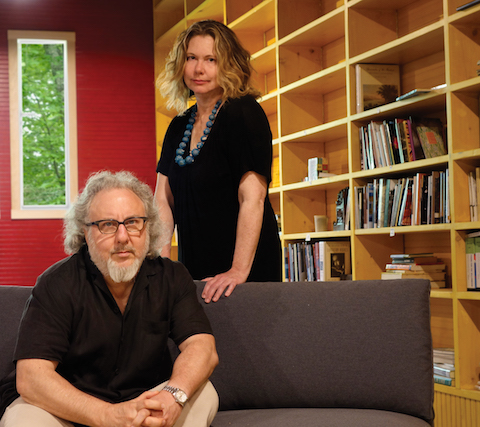 “For ‘Skywriting: Poems & Planes,’ we’ll honor the Barn's cultural heritage by reading and writing poems about wings, flight, and transformation,” she said. “We’ll provide poets with templates to construct paper airplanes out of the poems they write. They can keep their work, or launch it on a flight, to be found by a stranger.”

This class and the Poetry Barn are a homecoming of sorts for Kiernan. In the 1980s, she graduated from UMass Amherst with a BA in English and Writing and subsequently spent decades living in Brooklyn, working in Manhattan, and getting swept up in an urban lifestyle.

“Nothing prepared me for New York,” she said. “It took a long time for me to get back to poetry.” 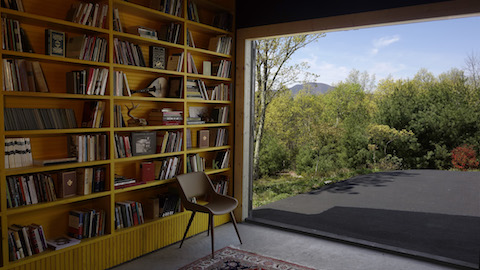 Above: The Poetry Barn. Photo by Chris Abramides.

Kiernan was an early devotee of the internet.

“I jumped on the dot-com boom after earning my MA in Media Arts from the New School,” she said. “I got hired at Barnesandnoble.com, got into web development and back-burnered my own creative work.”

In a twist, the internet would bring her back to poetry. In 2003, grief-stricken after her father’s death from a brain tumor, she found solace in the abundance of contemporary poetry book proofs freely available at her job. She returned, tentatively, to composing verse herself, as well as to write the occasional poetry and music review under the BN.com byline.

“Poetry saved my life,” she said. “But I was rusty. I found an online community of kind writers who took me under their wings, mentored me. They were part of a site called Perspectives.”

Kiernan was on the ALPJ masthead until 2007, when she struck out on her own, earning an MFA in Creative Writing from the University of Southern Maine. (This would culminate in the publication of her first full-length poetry collection, “Two Faint Lines in the Violet,” from Negative Capability Press, in 2014.)

In 2007, Kiernan created the invitational site The Rooster Moans Poetry Cooperative, where poets met and workshopped online. In 2012, she and her cohorts opened to the public, offering workshops taught by MacArthur scholars, MFA professors, literary journal editors and renowned spoken-word performers. Their motto: “Workshops that work.” 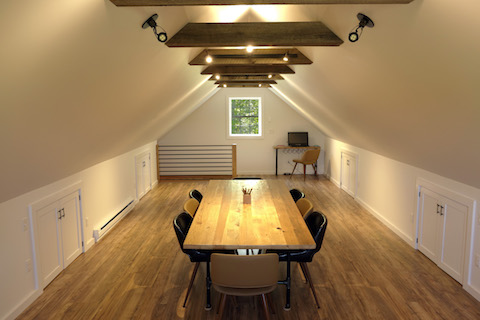 Above: The second floor writing workshop space at the Poetry Barn. Photo by Chris Abramides.

“We followed the seven principles of cooperatives, which include building community, working collaboratively and educating,” she said. Prices varied from free to $350 for once-a-week, four-week courses.

“The classes were themed,” Kiernan said. “Nuclear poetics, the grotesque, magical realism.” To her great delight–but not surprise–attendees to TRM online workshops were often published, and occasionally awarded.

“But now,” she said, “I want to see poets in the flesh, in a space where people of all phases of their writing lives can gather and talk poetry in-between private time carved out for writing.”

And thus, the Poetry Barn, which continues the work Kiernan invested in The Rooster Moans, but in a brick-and-mortar–or, rather, post-and-beam–setting. (Kiernan will also continue online courses under the Poetry Barn banner.) 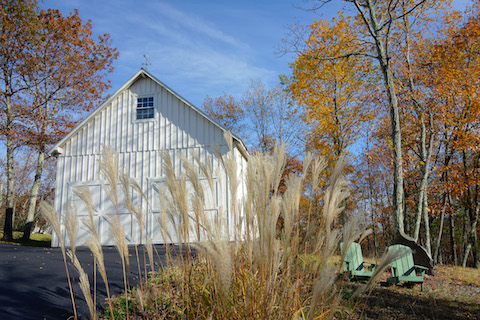 Above: The Poetry Barn. Photo by Chris Abramides.

After “Skywriting: Poems and Planes,” which Kiernan will oversee, the Poetry Barn will hold workshops on the last Saturday of every month through October. On June 25, Kiernan and poet Tina Barry conduct “A Feast for the Bards: Farm to Table Poetics,” the proceeds of which will benefit the Reservoir Food Pantry. Future workshops focus on bookbinding, haiku and acrostics.

In the meantime, Kiernan is stocking the Poetry Barn with books, looking for donations and canvassing library sales.

“My husband figured out we have space for ten thousand books,” she says. “And we’ve only just begun filling it up.”