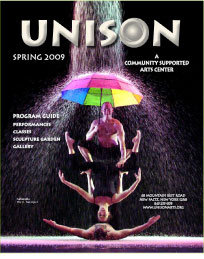 Hudson Valley Business posted a story this week about New Paltz's Unison Arts Center,  which is struggling to survive in a moribund economy and might soon face the budget knives under new Governor Andrew Cuomo.

Unison, which has been around since the 1970s, has been hurting for a year, the story reports:

“When the crash really hit in 2009, it was gut wrenching,” [co-founder Stuart] Bigley said. “For us, our funding cut off totally because of the way the grant program was structured. Those who started their fiscal year from January to June received their funding; those who started in July to December found themselves out of the money. We were one of them.

Unison has used every fundraising trick in the book to stay afloat since then, including holding yard sales, relying heavily on volunteers, and asking Bigley to serve as the center's program director for free.

Though private donors were more than generous after the financial implosion in 2008, “You can’t keep going back to the same well,” Pileggi said. “We are looking at several options; a merger with the Rosendale Collective is a possibility. They are actively and effectively making the Rosendale Theatre a real destination. We are drawing from the same audience of supporters and donors; for us, it would make sense to collaborate with an organization that has the same aspirations as we do. We are exploring all our options.”