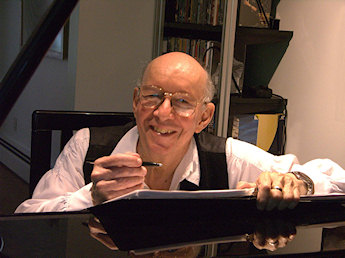 Dan Abrams: Photo by Joy Moore. Used with permission.The opera-loving hoi polloi in Mozart and Beethoven and Wagner's day didn't have access to live HD broadcasts. Outside theaters in metropolitan centers, they relied on solo artists, generally pianists, to compose and play arrangements of arias and interludes from current opera productions in public and private salons. Extending this opera mania to the concert hall proper, Franz Liszt was unique among l9th century composers in his recreation of operatic themes and arias.

This mythic Magyar superstar, who intermittently withdrew to the seclusion of monasteries in the course of his comet career, was surely avatar to the 21st century's keyboard master Daniel Abrams. Vaulting from contemplative immersion in musical tales of opera's love and lust in his serene Woodstock studio to an epiphany performance of original compositions inspired by them, Abrams' revelation of his subjects' grace, grief, and glory engulfed his audience at the Kleinert/James Arts Center last November.

This gallery, which is Woodstock's classical hall, was jammed with Hudson Valley fans Abrams has acquired since he first came to town to perform at the request of the well known impresario, Albert Grossman. Regional venues this internationally-acclaimed artist has graced include solo recitals and chamber music performances at the famous Maverick Concerts, a candlelight series in the Byrdcliffe Barn that he initiated, and numerous recitals at the Kleinert. Our premiere encounter with Abrams' keyboard wizardry, a gift not to be construed as facile virtuosity, occurred a score of seasons ago at the Kleinert, where his musical conjure of scenes from Moussorgsky's Pictures At An Exhibition ran like a multi-dimension scrim in the mind. It was a year when several distinguished pianists essayed this titanic work with majesty and nuance — but none with the uncanny evocations of Abrams.

The memory of this itinerant music critic, who has witnessed 3,000-and-one nights at the opera and other concert venues, harked back to the Moussorgsky phenomenon at Abrams' November Kleinert performance. The first half of his program was devoted to Purcell, Mozart and Beethoven, with each composition styled in the manner of the composer, as if (as Abrams wrote in program notes) "the opera might have been written as piano music." Offerings included an exquisitely layered Chaconne on Dido's Lament from Dido and Aeneas, which suspended sorrow, resignation, acceptance; variations on Voi Che Sapete from The Marriage of Figaro, and a flight of variations sublime on Ein Engel Leonora from Fidelio.

Then, in an hour that passed like nanoseconds of a dream, he drew us into the realm of the archetypal fantastic that Wagner struggled to capture in his "Ring" cycle. This work, Musical Portraits from Wagner's 'Ring', has already been performed in several concert halls in Europe, including the Concertgebouw in Amsterdam, where it was sponsored by the Wagner Society of the Netherlands. Other works from his Opera For Piano series have been featured at Martha Argerich's piano festivals in Europe and Japan.

It would seem a formidable thing to witness a keyboard concert devoted to the Ring without thorough advance knowledge of the plots, the arias, and the back-lying mythos of this Teutonic edifice. And what can Wagner be without heldentenors and sopranos riding glorious vocal lines? How could one man, even riding the orchestral piano, attempt to encompass this operatic citadel? The rational mind boggles; the rational mind of a rational artist shrinks.Only a man profoundly, and as madly obsessed as one of the Ring's own characters, who has lived the passions, the visions of their lot for a decade, if not a lifetime or two, and has a medium, nay, is a musical medium, is capable of drawing all witnesses with him into the volcanic maelstrom of this ediﬁce, evoking the prima passions of all characters in a creative leap of transformative power, transcending concert hall aesthetic, transcending, even, the ediﬁces of minutiae that go into a fully staged Wagnerian Ring.

The explosive response of the audience confirmed their own deep personal involvement in this experience.

Kitty Montgomery is a freelance writer whose commentary on classical musicians performing in the Hudson Valley and New York City has been reprinted in Chamber Music America, Musical America, The New Yorker, the New York Times, the Ukrainian Weekly, and numerous international press packs. Under the name "Cat Ballou," her column for the Woodstock Times ran weekly, over sixteen years. This is her review of a concert held last November at the Kleinert/James Arts Center in Woodstock.