Michael Koegel, owner of the Mama’s Boy coffee shop on Main Street in Phoenicia, is still a very fresh face in town. The former Manhattanite moved up to the mountains full-time to open up his shop just last year. But he’s already jumped into small-town life with both feet – especially through the Shandaken Theatrical Society. Through next weekend, Koegel is starring in STS’s production of The Foreigner, which he also co-directed with STS’s artistic director, Amy Wallace. It’s a rollicking comedy set in the hill country of backwoods Georgia. From the STS website:

In Larry Shue’s hilarious farce, Charlie Baker, a proofreader by day and a boring husband by night, adopts the persona of a foreigner who doesn't understand English. When others begin to speak freely around him, he not only becomes privy to secrets both dangerous and frivolous, he also discovers an adventurous extrovert within himself.

We caught up with Koegel to find out how the show is going. (And maybe to steal a few of his time management tips.)

Watershed Post: Putting on a show is always a challenge. But you’re directing the show and playing the lead role at the same time. While running a new small business. How’d you survive?

Michael Koegel: [Laughs] I wasn’t supposed to be in it.

WP: How did that happen?

MK: It wasn’t an ego thing for me, it was just the most expedient thing. The guy that was supposed to play the lead dropped out. And everybody else was already cast. I had a fabulous cast. I had a dream cast. And this one actor just dropped out. But I’d directed the show twice before, so I knew the part.

The thing about Charlie is he has a made-up language, and you have to learn a lot of words that don’t really mean anything. There’s a lot of memorizing. But I actually knew it. I could do those monologues in his made-up language before I even walked into the audition.

Amy ended up taking the reins as director. It went great. But it wasn’t a plan.

WP: Tell me a little more about The Foreigner.

MK: The play’s really funny. It’s one of those plays that you can just see again and again and really enjoy. It’s got a message, it’s a really positive show, it’s kid friendly, you sort of can’t go wrong. And everybody’s having a blast.

It’s so much fun to be a part of, because it’s one of those plays that once it gets rolling – and it takes about 15 minutes for the setup to kick in – there’s not a bad role in the play. Every single actor gets their moment to really shine and have a funny line. Saturday night, the audience broke into spontaneous applause in the middle of a scene. It’s so great to be onstage and making people laugh. It’s the coolest, coolest feeling. 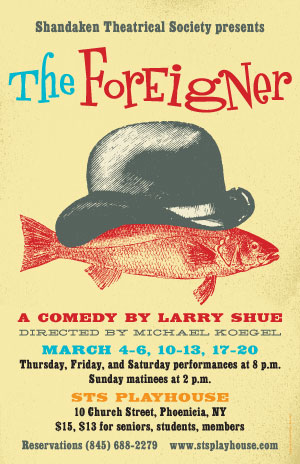 WP: I understand that our hero finds himself deep in redneck territory and surrounded by a very strange cast of characters. Can you relate?

MK: (Laughs) Um, yeah. I sort of can. Not only is he an Englishman in the middle of Georgia, but the plot he gets in the middle of is sort of a land grab. There’s all these issues about who owns property, and how people can steal property from other people, and all this small-town kind of stuff.

Let me see if I can say this without getting myself in trouble. I don’t think of the people in this town to be as caricature-y and redneck-y as the people in this play. But there’s two types of people in this play, the locals, and people from Atlanta who have gone up to the mountains to live. It’s set in a fishing lodge. Honestly, if you got rid of the accents and you placed it in Phoenicia, it would not change a thing. Which is kind of funny.

WP: I was going to ask you if there were any surprises during the rehearsal process, but I think we kind of covered the main one, no?

MK: Well, there’s a kind of sweet thing that happened, it was sad but sweet at the same time. [Koegel’s partner] Trent and I lost Buddy [their dog] two weeks before the show opened, and I had to miss rehearsal when we had to take him to the vet to get put down.

Easily the most painful thing I’ve had to go through was losing Buddy. But there’s this homage to a fictional character named Buddy in the play. Every night I get to sing the praises of Buddy, and have this emotional moment, even though it’s brief, and I almost cry every time I do it. It’s so nice that I can get up there on stage and for one little selfish moment be in my own little world. It’s very cathartic to do that.

WP: You’ve done professional theatre and worked on much bigger stages. How does working at STS compare?

MK: The thing about STS is that the whole company depends on the volunteer spirit and the community involvement. I’ve done this play twice before, and there are people in this show that are better than the people in my professional company. So it’s not about the quality of acting.

The cast is really talented. There are some people who have never been onstage before. A local graphic artist named Mark Lerner, he’s really good. Alise Marie, she’s never been onstage in her life, and I swear to God she could be a movie star. Drop dead gorgeous and a natural actress. She’s by far a better actor than I am, and it’s her first time. And there’s a bunch of local people who have been in other shows before, they’re great.

No one’s getting paid here, it’s all volunteers. People do it for the fun of it. I don’t have to tell you, it’s a real shoestring cast of characters. For sure, it would be really wonderful to see more people involved in the theater over here on any level. Especially young people. If we don’t start attracting more kids to the theater, then it dies out.

Photo of Michael Koegel and his dog Truman; reproduced with permission.

Tonight: Eat, drink, and be scary in Phoenicia
Letter to the Editor: See the "Spitfire Grill"

"Into The Woods" opens in Phoenicia

The play's the thing at STS