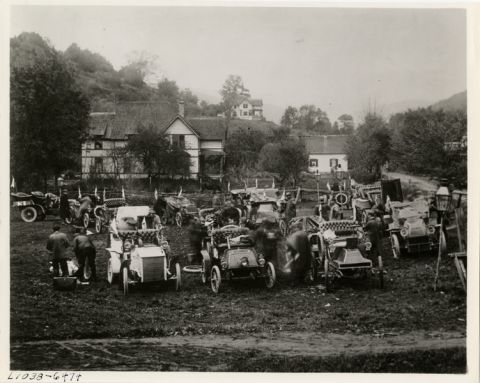 The birth of automobiling can be found in 1903 and the first transcontinental auto drives in that summer leading to the Automobile Endurance Run of October 1903. That Endurance Run brought 36 cars from 17 American makers with 125 passengers, including one woman, on a route up the Hudson Valley to Kingston and then across the Catskill Mountains on the Ulster and Delaware Road, now State Route 28. The final destination was Pittsburgh, on an 800 mile route through Delhi, Unadilla, Binghamton, Buffalo, Erie and Cleveland. Road building was spreading and by 1903 a 20 mile Ulster County section from Olive to Pine Hill along now Route 28 had been paved with crushed local Bluestone macadam paving. On October 7 the cars parked overnight in a field at Pine Hill.

On October 8, 1903, the cars left Pine Hill and headed into Delaware County where they encountered a deluge of six inches of rain over old dirt roads which turned to mud. By the time they reached the Susquehanna River at Unadilla, 10 inches of rain had fallen and flooding was widespread. The cars and the people were tough and determined and their heroic efforts were widely reported and inspired the nation. Most of the cars made it to Pittsburgh and the veterans called themselves the Mud Larks.

The lone woman on the Run was Edith Riker, passenger in husband Andrew L. Riker's Locomobile. As the only woman she was interviewed and mentioned in many of the articles written about the Run. She said she was “de-light-ed” with the trip and had this observation:

Mr Riker does love to drive fast and I don't care. He won't jeopardize his own life, and I am as safe as Mr Riker, anyway. It is glorious, I think, to fly through the country night or day at railroad speed over all sorts of roads.

That “flying at railroad speed over all sorts of roads” defines the birth of automobiling. The individual mobility, the automobility, we now rely on every day we get in our cars and drive our roads is here expressed 113 years ago. The Rikers and their Locomobile returned over the same route taking photographs, making a 1600 mile round trip.

On Oct 8, 2016, at 2pm, marking the anniversary of the Automobile Endurance Run's passage through Delhi, a presentation will be given at the Delaware County Historical Association (DCHA) by Robert Selkowitz, Director of Historic Automobile Endurance Runs, LLC. He encourages people to drive their favorite cars to Delhi, especially along the historic Route 28 recently designated the Catskill Mountains Scenic Byway. The event is free. DCHA is located at 46549 State Hwy 10, three miles east of intersection with Route 28 in Delhi. Phone is 607-746-3849