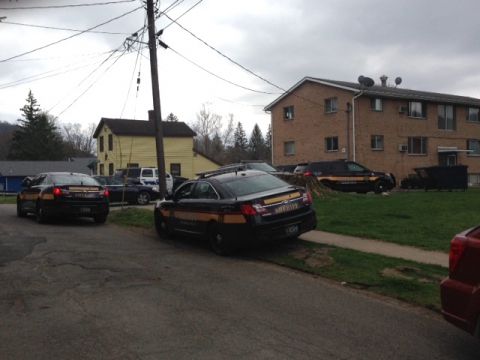 Police raided the apartment after obtaining a search warrant as part of a heroin trafficking investigation at the Marvin Street Apartments, according to the press release. They allegedly found the heroin, a number of Xanax tablets and $200 in cash.

Police expect to file additional charges against Coe, allegedly for the sale of heroin. Coe was also found to possess a New York State Public Assistance Benefit Card, according to the press release.

Above: Heroin, prescription pills and cash allegedly found during a raid at an apartment in Deposit. Image via the Delaware County Sheriff's Office.

Both Coe and Moore are being held at the Delaware County Correctional Facility on $100,000 cash bail, police say.

“The Delaware County Sheriff’s Office is steadfast in our determination to eliminate these dealers from our communities," said Undersheriff Craig DuMond in a press statement. "We continue to encourage the public to utilize our anonymous TIP line (1-888-914-9111) to report criminal activity. Citizens serve as our partners in making our communities a better place for all who live, work or visit Delaware County."